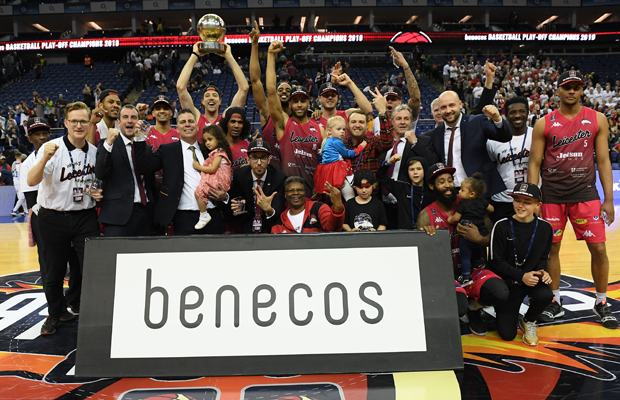 Leicester Riders made it three Play-Off titles in a row with an impressive 93-61 victory over London City Royals in the BBL Play-Off Final, in front of 13,000 fans at The O2 on Sunday.

The result sees the Riders collect their fifth BBL Play-Off title, while the Royals are denied a fairy tale ending to what has been an incredible debut season that saw them win the BBL Trophy.

Tim Williams picked up MVP for his 20-point, 10-rebound double-double, as a close first half saw Riders dominate the third and never look back.

“We stayed even and played our game,” Williams said.

“We had a really good Play-Off Final and I’m really proud of everybody. I came in late, but these guys took me in. As time went on I feel like I found my groove with these guys.

“Everyone knows how long our season has been and how many games we have played – it’s been a real grind. Coming into today I knew we were going to be locked in.”

19 points from Matthew Bryan-Amaning led Royals, along with 15 from Orlan Jackman and 8 from Sam Toluwase.

The Riders ended the first half with a late Holder triple and Leicester carried the momentum into the third period. The Riders poured in 19 points in the opening six minutes of the quarter and held the Royals to just four as they pulled away and never looked back.

“We have had a great season and it would have been nice to cap it off with a win,” Jay Williams, London City Royals head coach said.

“But, hats off to the Riders – they came out with a game plan and really executed. I’ve learnt a great deal this year and we’ll just apply that and build again next year.”

“I am massively proud of the guys and what we’ve been through this year.

“The ups and downs and injuries happen. But we stick together and it’s nice to finish off the season with another win.

“We have been written off throughout the season – people saying we’re going to fall off the top – but it just shows that when we put on our A game out there no one can beat us.”