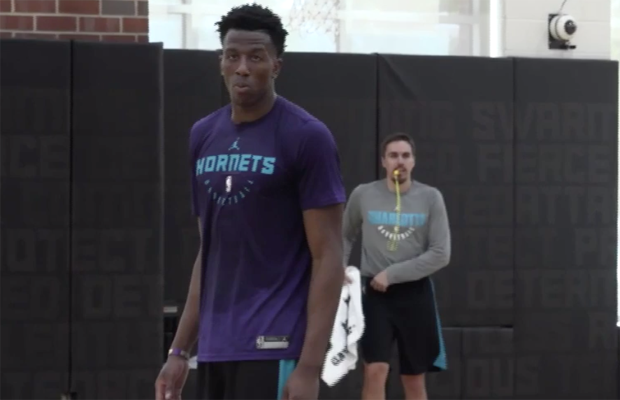 Despite not currently being on any mock-drafts, the former GB Under-20 believed the workout went well, trying to show his ability to defend multiple positions.

“It went well,” Bigby-Williams, originally from London, told the Charlotte Hornets media team. “I think we showed what we could do. Everyone’s competing and playing hard so I thought it went pretty well. Everyone’s trying to fight for our spot, maybe a summer league spot, a draft pick, stuff like that. Everyone’s trying to show these scouts and coaches what we can do.

“Rebound, play hard, defend, I know what’s what’s gonna give me a chance. I gotta go hard on defence and that’s what I try do. I know my offence is a work in progress, but I know I can bring defence to a team in my rebounding and athleticism so that’s what I try and do every time I step on to the floor.”

Bigby-Williams played his first two years at Gillette College, picking up the 2016 NJCAA Division 1 Player of the Year, before going to Oregon where he went to the Final Four, and then transferring for his Senior year at LSU.

He also competed at the Portsmouth Invitational Tournament this summer, for the top graduating Seniors in the country.

FSU’s Terance Mann with a nice dump off to LSU’s Kavell Bigby-Williams for easy dunk. Roger Browns now leads 31-12 with just over 8 minutes remaining in the half #PIT19 pic.twitter.com/OLBZJevxhB