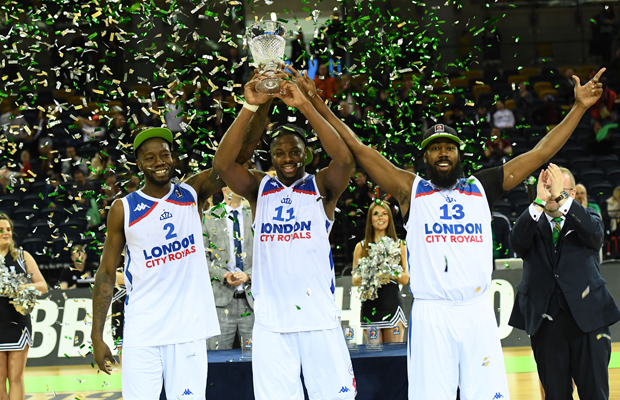 The Royals earned a first piece of BBL silverware, in their first appearance in a final, in what has been a spectacular debut season. The wait for Trophy success for the Lions continues, as the team miss out on the chance to add to the Cup title they won earlier in the year.

Ashley Hamilton was key to the Royals success, scoring 25 points and adding 14 rebounds on 10-of-14 shooting to pick up MVP honours.

“I’m lost for words,” Hamilton said. “It was a battle – we played against a very difficult team. We were missing one of our key players, Wes Washpun but everyone put in top class performances, today.

“I came in to help this team be successful and to win something in our first season, it’s a great achievement – I’m so proud.”

Matthew Bryan-Amaning also stole the show for the winners, netting 26 points to go along with 8 rebounds, 7 assists and 4 blocks.

“It’s a big stepping stone – where we wanted to start,” MBA commented. “We decided to come together and play at home. We knew it was going to be tough, but we made a pact that we were going to win.

“We believe in a team and I honestly think that was our best team performance of the season.”

Will Neighbour added 12 for the victors and Ed Lucas had 11, including the late three in regulation to force overtime. The Royals exploded to life to start the extra period, scoring the first six points to take control of the game.

Justin Robinson’s 20 points, 6 rebounds and 4 assists would not be enough for the Lions, who also received 17 apiece from Ladarius Tabb and Brandon Peel.

“We thought we had the game up until the Ed [Lucas] three.

“It was a physical game and a great show for the fans. All credit to the Royals for playing a great game. This will only give us more motivation for the league and Play-Offs.”