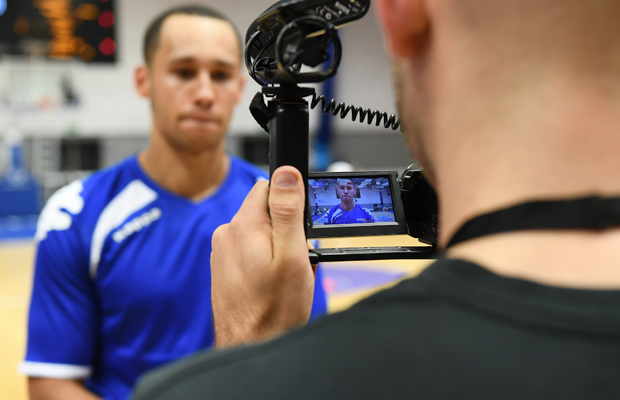 The British Basketball Federation has received a host of criticism following their decision to ban independent filming of game-action at Great Britain’s games during the last international window.

Following a private back and forth between Hoopsfix and the BBF’s media liaison asking for clarification on a note on the accreditation application form saying no filming of the live game was allowed, the federation released a lengthy statement on their website confirming their position, attributing it to the need to provide benefits to contracted sponsors which they cannot guarantee through independent filming.

The BBF currently has no major commercial income from sponsors, and no broadcast deal for games, meaning they are the sole rights-holders and can do as they wish with the games after they have met their obligations to FIBA (a live stream with FIBA-branded graphics).

The NBA – the world’s most successful league – freely allows highlights to be shared because it promotes their brand and widens their audience. British Basketball – ignored by almost everyone – bans filming. Bravo.https://t.co/y2J0E7A21V

The BBF pointed to the live stream being available on YouTube for fans and media alike as justification for the decision, only for the stream to not be available for the entire first half of the match-up with Cyprus at the National Basketball Performance Centre in Manchester.

One fan, Andy Kelham, whose Twitter thread was shared widely online, pointed to a number of potential solutions if it is about sponsor exposure, like ensuring independent media include sponsor logos in their footage, or enforcing any media to perform interviews in front of a sponsor-branded back drop.

You said it yourself in your 2016-2028 strategy document. We need to 'raise basketball's profile to attract a sustainable flow of income'.

And your third strategic priority is 'to showcase basketball via widely-available, engaging content'.

Understandably, the decision has not been well received across social media by fans, or the sport media business landscape with a number of experts in the space expressing confusion.

In Episode 52 of the Leaders Sports Business Podcast, the co-hosts dissected the decision for almost four minutes pointing to it moving away from the general industry trend.

“Clearly, this is going against the grain of the general industry trend for accessibility,” Editorial Director James Emmett said. “Frankly, GB basketball is an organisation that needs every bit of promotion they can get, so you can see why the immediate response was quite negative.”

Listen to the full four minute segment below:

Countless other fans and players chimed in on Twitter:

No wonder basketball in this country is such a mess. Who is making these decisions!?

In a sport where we already don’t have enough coverage, media attention or marketing. This decision is ridiculous and GB need to recognise that it’s not helping the sport in any way. Independent media is only bringing more light and attention to the British game. S/O to Hoopsfix

GB basketball doing GB basketball things. Things which are short-sighted, ignorant, and ultimately damaging to the sport they are meant to be promoting. https://t.co/c4grD9Tw4u

I have absolutely no words for this!

This seems short sighted. You have people actively wanting to promote your sport, for free, via mediums that they truly understand, and you're preventing them? I'd love to see you partner with them and sell your sponsors on a long term vision of GB basketball cc @Hoopsfix

Trying to quantify my thoughts, but I can’t. This is daft and would love to have seen the thought process going into this. How have they actually rationalised this as a decision that they think will promote any sort of growth or greater exposure? Mental.

This is just crazy! They should be grateful for any publicity the sport gets in this country!
Serious changes needed at the top for it to actually grow!

It remains to be seen whether or not the decision will be reversed ahead of the team’s next games, the Great Britain Senior Women have EuroBasket in June; though it remains unclear if they will have any prep games in the UK yet with no schedule having been announced, whilst the Great Britain Senior Men will have their next round of pre-qualifiers in August against Kosovo and Luxembourg.