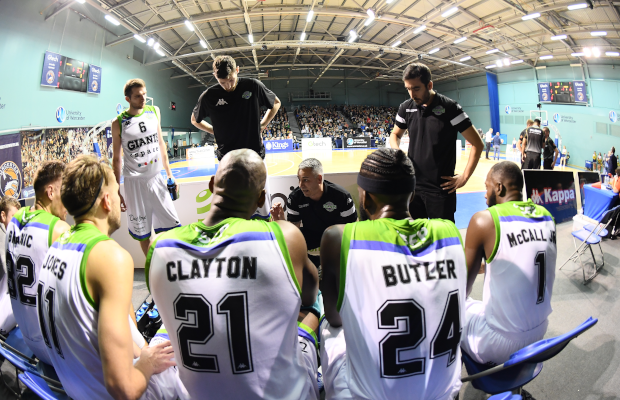 The BBL Cup returned this weekend with a bang with Manchester Giants securing their first quarter-final since returning to the league in 2012.

Three of the Quarter-Final matchups in the BBL Cup have now been revealed!#BritishBasketball pic.twitter.com/VHqekSCzpC

Here’s a round-up of all the action:

London Lions moved to a 5-1 record in the BBL Championship after fending off Cheshire Phoenix at the Copper Box Arena.

Brandon Peel produced 22 points and 13 rebounds with some crucial shots for the Lions with Ladarius Tabb also adding a double-double to help their side keep up their strong start to the season.

For the visitors, Jimario Rivers had 23 points and 15 boards with Cheshire suffering another defeat on the road to fall to 4-3 in the league.

BBL Cup defending champions Cheshire Phoenix advanced to the Quarter-Finals after securing a win at DBL Sharks Sheffield on Saturday.

Big WIN for Nix in the 1st round of the @BBLofficial Cup!

Safe trip home to the team and fans who travelled! Next round details to be confirmed soon! 🏀#NixNation #BritishBasketball pic.twitter.com/pTJE3yUuWn

Phoenix showed strong performances at both ends of the court including Momcilo Latinovic (16 points), Daniel Norl and Jimario Rivers (15) both reaching double figures for the holders.

Don't miss seeing Bouna in action again next weekend when we welcome Plymouth Raiders Basketball Club to the Emirates for the first time this season.

Bouna Ndiaye helped the Rocks to strong home performance with 26 points and seven rebounds while Gareth Murray’s 16 points made sure.

Bo Ziegler, Alasdair Fraser and Kenny Carpenter made sure the Rocks had a clean sweep in rebounds, assists and steals respectively.

Filip Kramer finished as the Wolves’ top points scorer in the game with 13.

Manchester Giants made history as they set up their first quarter-final tie since their return to the league in 2012 with a win at Surrey Sports Park.

Surely there's no doubt over what the biggest story of the weekend is? Through in the @BBLofficial Cup for the first time in 7 seasons, with Willie Clayton (@willieclayton21) breaking rebounding records! Get voting below #GiantsFamily👇#beeGIANT🐝🏀 #BritishBasketball https://t.co/LSFLbsOZyt

Willie Clayton dominated the court with an impressive 23 points, 25 rebounds and three blocks while Jordan Williams tried to salvage something for Surrey Scorchers with his 15 points.

Scorchers started off strongly and initially led by 11 points before the Giants started to find their rhythm as the hosts struggled to improve on their 26% 3-point range.

Plymouth Raiders responded in the perfect way after their derby defeat to beat rivals Bristol Flyers.

Fred Thomas’ 16 points and Tevin Flazon’s 13 points were not enough for the Flyers to do the double over the Raiders in as many weeks as Raiders powered through despite having Devontavius Payne and Zak Wells ejected.

Joonas Jarvelainen led the way for Plymouth with a 29-point haul, while Donte Nicholas finished with 16 points and 16 rebounds.

The strong home performance will see them hosts Glasgow Rocks in the quarter-final.