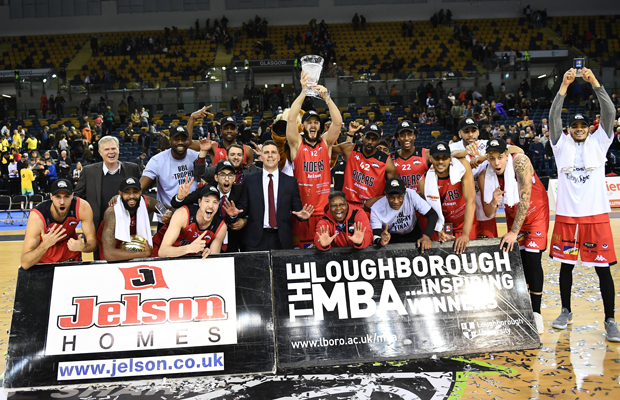 Leicester Riders claimed the BBL Trophy title for the third consecutive year after edging out DBL Sharks Sheffield in a classic Final, at Emirates Arena on Sunday afternoon.

Both teams led in the fourth quarter as Sheffield battled back in contention and were left to rue a late three from Chris Alexander that somehow stayed out and could have forced overtime.

It was a typically great team effort from the Riders with five players in double figures. Shane Walker top scored with 16 points, while JR Holder finished with 15 points, 4 rebounds, 3 assists and 2 blocks to earn the MVP award.

“”It was a real up and down game – we had it early but they came back and applied a lot of pressure,” Holder said.

“We’ve been down in a lot of games and we always come together and were able to produce a big finish. You never know who is going to go off in these games because we have so many weapons on the court.”

Tyler Bernardini added 14 for Riders, whilst Chris Alexander led Sheffield with 20, Mike Tuck had 17, whilst Rob Marsden finished with 16.

“We showed incredible heart to fight back and put ourselves in a position to win,” Marsden said. “We can be proud of our performance but we’re gutted we couldn’t bring back the Trophy for our fans.”

Riders came out firing and led by as many as 17 points in the first half before the Sharks battled back in the third period. Chris Alexander stepped up in the fourth to fire Sheffield ahead, though Eric Robertson produced the decisive triple in the final minute to help Riders seal the victory.

The difference between the two teams in the first half was from behind the arc with Leicester shooting 8 of 11 from 3-point range as Sheffield struggled at 2 of 11 and only finished up with 4 of 17.

“For the majority of the week I wasn’t sure if I would be able to suit up at all. I’m grateful I got the opportunity to play and to contribute to the team’s success.”