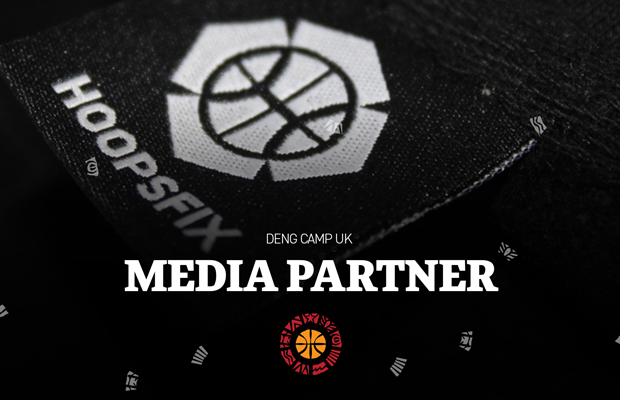 Hoopsfix will be the official media partner for DENG Camp UK 2017, taking place from 23-26 August at Crystal Palace National Sports Centre, the media outlet and camp have revealed today.

Hoopsfix has covered the camp each year but will now be granted full access with the new partnership, providing footage of top plays, interviews with players, coaches and staff, Snapchat and Instagram takeovers, as well as behind the scenes insights.

Founded in 2010 by Sam Neter, Hoopsfix aims to cover all levels of British basketball, with a keen focus on top prospects coming through.

“We’re incredibly excited to be able to make a formal partnership with DENG Camp for this year’s event,” Neter commented.

“DENG Camp has risen to prominence in a relatively short period of time, and cemented its status as the top elite junior camp in the UK. It is with great honour we are able to support the work of Luol, Steve and the rest of the staff.

“Having access across all four days of camp will provide us with an incredible amount of content in comparison to previous years, and means we should be able to provide greater insight and exposure into the top young players in the UK.”

DENG Camp is entering its fourth year under the new Top 50 ranking format, featuring the top Under-19 players in the country. At the camp, the players undergo a series of individual drills, combine testing, classroom analysis, strength and conditioning training and competitive games.

The Top 20 players ultimately end up ranked, participating in an All-Star Game to round out the four day camp.

“Each year we have increased our media outputs which we want to continue to build on and there is no better way to do this than bringing in Hoopsfix. It’s no secret that they are the leading media outlet for British Basketball where we feel it’s time that we up our game and spread the camp brand even more.

“Add that right now is such a critical time for people all across the UK to start constructively working together to grow the game in a positive way so this was also a big factor into contacting Sam and wanting Hoopsfix to join our team.”