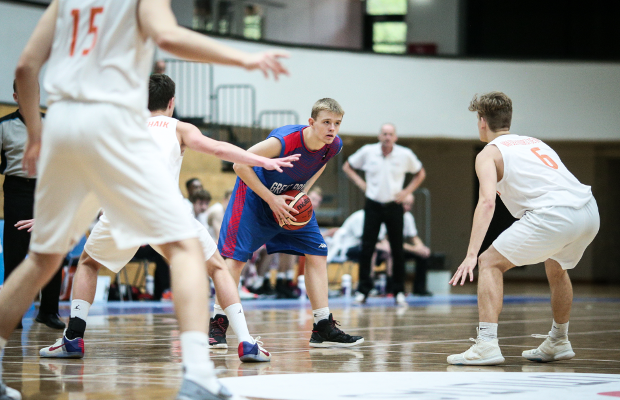 Great Britain Under-18s booked their place in the Division B quarter-finals at the European Championships after easing past Albania 100-43 in Tallinn, Estonia on Wednesday.

Alan Keane’s side were assured of a place in the last eight with a win and advance as group winners as previously unbeaten Sweden fell to their first loss with the Netherlands taking second place.

Nathan Robinson top scored with a game-high of 18 points with four players finishing in double figures.

GB made their move early in the opening period with Henry capping a 12-0 run with the first three of the game before moving to 10 points. The defence stifled Albania, forcing multiple turnovers including eight-second violations and GB led 27-9.

Jacob Round checked in for the first time since suffering an ankle injury in the second game and netted a three for an instant impact. Robinson knocked down consecutive 3-pointers as the GB lead continued to grow – heading into half-time up 48-25.

Henry started the second half with back-to-back threes of his own as GB scored the first 15 points of the third quarter. Albania were held scoreless for over five minutes before breaking their duck with a 5-0 run.

GB continued to dominate at both ends with Amabilino and Robinson maintaining the barrage from downtown as the lead soared towards the 50-point mark at 77-31.

The rout continued in the fourth with GB completing a comprehensive performance by taking the final period 23-12 for a 57-point winning margin with Kaiyem Cleary bringing up the century with a late dunk.

– GB’s starters were Russell, Savery-Richards, Henry, Boachie-Yiadom & Spence
– Hosana Kitenge was a DNP despite having been named amongst the initial starters by GB
– Jacob Round played 6:34 – his first action since an injury against the Netherlands
– GB top the group and avoid unbeaten Croatia in the last eight
– GB’s quarter-final will take place on Friday, scheduled for 11:45am UK time (TBC)