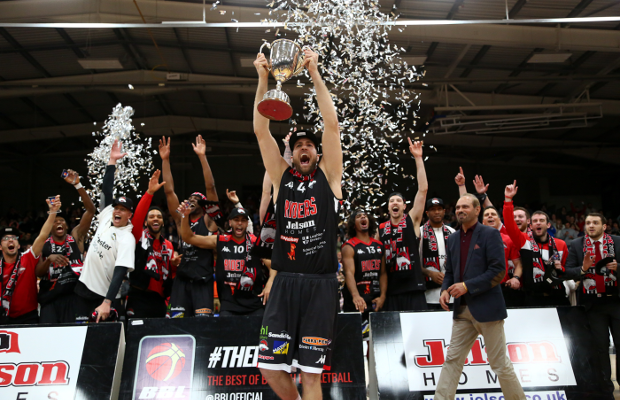 Leicester Riders are BBL Championship winners for the second year in a row after sealing the title in front of their home fans on Friday night.

Rob Paternostro’s side needed just one result heading into the penultimate weekend of the regular season and broke clear in the second half to beat Plymouth Raiders 99-69.

The Riders improve to a 26-3 record with four games still to play, including two in three days against Newcastle Eagles next week.

It completes a season double for the Riders having won the BBL Trophy title in March and their third league title with the first coming in the 2012-13 season.

VIDEO: Check out the highlights from the second half as the Riders claim the BBL League title for the third time in club history! #OneTeam pic.twitter.com/kDEV7KHWOQ

Leicester were level at 44-44 with Plymouth at half-time in the clash live on the BBC Sport website but asserted control with a 24-7 third period before Conner Washington turned on the style in the fourth with 12 points to finish with a team-high 18.

Shane Walker got the ball rolling with an all-action start at both ends of the floor with Drew Sullivan making a big impact off the bench as he would pick up a 19th winner’s medal in the BBL.

Meanwhile, Taylor King moved past 1000 points in his short BBL career with a triple in the second period as the contributions kept coming throughout the roster.

Holding a Plymouth side with their firepower, to just 25 points in the second half speaks volumes of the Riders’ defence and having seven players score 9+ points epitomises their strength in depth.

Six players average double figures in points this season and it will be difficult to single out just one player for MVP honours, such is their collective efforts which has once again made them the team to beat.

But they won’t care about individual success, the silverware keeps coming for the club and they will be determined to make up for last year’s disappointment at The O2 in the playoff final.