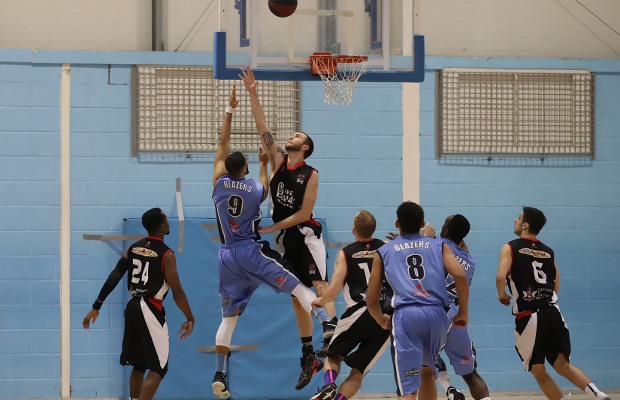 The latest round-up of all the action from D1-D4 in the National Basketball League (NBL).

Team Northumbria (13-2) continue to lead the way in D1 after securing a hard-fought 72-80 win away at Essex Leopards (5-8). Malcolm Smith top scored with 20 points as the visitors won every quarter by 1-2 points to secure their 13th league success.

Manchester Magic (11-3) are in hot pursuit and they recorded an emphatic 47-94 victory on the road against Westminster Warriors (0-13) behind 19 points from Ryan Lewis with Derby Trailblazers (10-3) suffering their third loss as Bradford Dragons (8-7) earned a 103-93 triumph.

Rafi Saipe and Ricky Fetske evenly shared 42 points in the contest as the Dragons continue to push for a spot in the top four, while their victory allowed Northumbria to open up a gap at the top of the table.

Meanwhile, Solent Kestrels (7-6) edged out Loughborough Student Riders (7-7) as Marquis Mathis posted 23 points and 10 rebounds in the 77-73 win. The visitors were paced by 22 points from Josh Ward-Hibbert, but the Riders have now lost seven of their last eight league games.

In contrast, Reading Rockets (9-3) are enjoying an impressive winning run and they extended their streak with a 100-97 win at home to Hemel Storm (4-10) after Craig Ponder poured in 35 points. Rockets captain Danny Carter added 25 in the win with Nik Rhodes scoring 29 points for Storm.

Also, Leicester Warriors (6-8) held off a late fightback from Worthing Thunder (4-11) to win 72-70 despite 25 points from Lyonell Gaines, while London Lituanica (7-5) claimed a 71-67 success against Lancashire Spinners (4-9) as Ausridas Petraitis netted 18 points.

Team Newcastle University (10-2) secured a memorable 107-108 victory in D2 away at Kent Crusaders (10-2) on Sunday in a quadruple overtime thriller. Romonn Nelson poured in an impressive 44 points in the win with Richard Austin and Fran Urli adding 26 and 22 points respectively.

It completed a double-winning weekend for the Knights having eased to an 84-62 win over London Westside (6-7), while Kent picked up their 10th league win on Saturday after beating Doncaster Danum Eagles (2-10) 87-76 with the trio of RJ Eytle-Rock, Amin Adamu and John Shodipo all netting 18 points.

Thames Valley Cavaliers (11-2) now have the outright lead in the division as they defeated Liverpool (3-9) 105-67, on Saturday, with Martelle McLemore top-scoring with 26 points. Also with 11 wins are London Greenhouse Pioneers (11-2) after they eased past Tees Valley Mohawks (4-7) 101-73, despite Charlton Jones scoring 26 points.

Elsewhere, Ipswich (6-7) earned another road win by overcoming Derbyshire Arrows (5-7) 66-75 with Tom Sadler and Luke Mascall-Wright combining for 40 points for their side. Nottingham Hoods (5-8) were also victors on their travels after beating Newham Neptunes (1-12) 68-75 behind 32 points from Delaney Powell.

Update: There was further D2 action on Wednesday and Team Newcastle added a third win in close succession after beating Tees Valley to join the Cavaliers on a 11-2 record.

Nathaniel Akins led Calderdale Explorers to a 61-88 win at Kendal Warriors with 30 points in D4 North action, while Sefton Stars II edged out Stockport Falcons in a 91-88 win.

In D4 Midlands, City of Birmingham claimed a 67-58 win against Kings Lynn Fury with Nottingham Hoods II falling to a 57-63 home loss to Shropshire Warriors in the only other game to take place on the weekend.

University of Chester advanced to the Semi-Finals in the National Shield after recording a convincing 64-90 success away at Team Sunderland. Phil Brandreth led the way with 34 points in the big win on the road.

Abdoulaye Sylla poured in 34 points to lead Oxford Brookes University to a 94-82 victory over Brunel Ducks with Adam Thoseby netting 27 points in a losing effort.