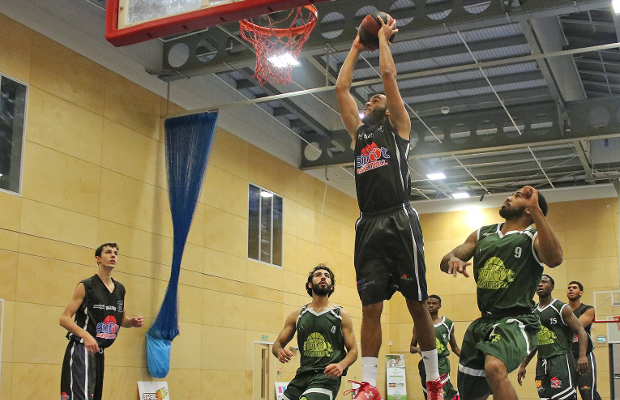 Here’s a look through the latest weekend around the NBL from D1 down to D4.

Derby Trailblazers (4-0) lead the way at the top of D1 after a successful weekend double-header. Matt Shaw’s side defeated Westminster Warriors (0-4) 90-77 on Saturday before following with a 69-90 success at Team Northumbria (3-1).

Josh Ward-Hibbert posted 25 points and 14 rebounds in the first victory with Oliver Stanley adding 19 points and 14 boards of his own before Ward-Hibbert added another 26 points to his weekend tally against Northumbria, who were led by Malcolm Smith’s 31-point haul.

It was a first loss for Northumbria who had improved to 3-0 the day before after Lewis Champion led his side to a dominant 98-48 victory against London Lituanica (1-2) with 23 points. The visitors were again under-manned and led by Ausridas Petraitis’ 12 points and 16 rebounds.

Meanwhile, Manchester Magic (3-0) maintained their own unbeaten start with a 60-80 success at Essex Leopards (0-3) behind Simon Anumba’s 30 points on 12-of-16 shooting with Ryan Lewis adding 14 points and 13 rebounds.

Loughborough Student Riders (3-0) are also still to taste defeat as they survived a comeback to defeat Leicester Warriors (1-2) 77-74. Alex Roberts top scored for the home side with 21 points, while Darrell Bethune had 25 in vain for the visitors.

Solent Kestrels (1-2) bounced back from last week’s heartache with a 97-93 victory at home to Hemel Storm (1-2) with three players netting 20+ points. Marquis Mathis top scored with 26 while Stephen Danso and Colt Fason added 22 and 20 respectively.

There was also a convincing victory for Bradford Dragons (2-1) this weekend as they recorded a 121-93 win against Westminster Warriors with Marcus Gooding and Rihard Sulcs pouring in 28 points apiece in the high-scoring victory.

London Greenhouse Pioneers (3-0) maintained their unbeaten start in D2 with a 97-73 victory at home to Doncaster Danum Eagles (0-3), who were led by Liam Knapp’s 22 points, while Team Newcastle University (3-0) also made it three wins out of three with Romonn Nelson scoring 22 points in a 62-74 win away at Nottingham Hoods (1-2).

In D3 South, Middlesex LTBC (4-1) were victorious in the only game on the weekend as they recorded an 84-73 success over Southwark Pride (0-1) despite 26 points from Gedi Juozapaitis. The home side were led by 18 points apiece for Tadas Bagdonas and Modestas Krasauskas.

In the Midlands, Shropshire Warriors (3-0) joined two other teams on three wins from three after beating Birmingham Mets II (0-3) 48-72 on the road behind 22 points from Josh Crutchley. Also, City of Birmingham (0-3) were edged out 72-74 by Derby Trailblazers II (2-2).

With RCT Gladiators already waiting in Round 3 following their 66-85 triumph at Cardiff City at the end of September, the Second Round got into full swing on Sunday.

Daniel Belgrave’s 27 points were not enough as Birmingham Mets suffered an agonising 78-76 loss at City of Birmingham, while Team Birmingham Elite recorded a narrow 69-67 success against Team Wolverhampton despite 25 points from D Mason.

London Thunder Lewisham reached the next round with a 67-63 victory over Greenwich Titans with Nottingham Hoods II claiming a 69-81 win at Mansfield Giants. There was a comfortable 99-64 win for Barking Abbey Crusaders over Chelmsford Lions and Worcester Wolves II defeated Birmingham Mets 41-94.

Northants Taurus won the inner-city battle against Northants Thunder with a 75-82 win, while Oxford Brookes Devils claimed a 52-66 win against Reading Rockets II. Finally, Sam Richardson and Jack Daley netted 31 and 25 points respectively to lead Cambridge Cats to a 74-107 victory against Kings Lynn Fury to reach the next round.

There are still two games to be played before the Third Round takes place on the second weekend of November.