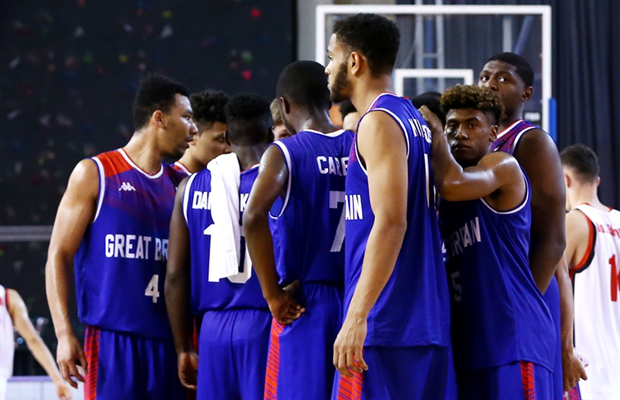 Great Britain Under-20’s finished their Division B campaign at the European Championships with victory after beating Georgia 77-41 to finish in seventh place, on Sunday afternoon in Chalkida, Greece.

Andreas Kapoulas’ side finish with a 5-3 record for the tournament after ending a run of three consecutive defeats to end on a high, despite the earlier disappointment of missing out on promotion.

Callum Lawson top scored with 14 points and collected 10 rebounds, while Jules Dang Akodo added 11 points and there were 10 points apiece for Josh Steel and Sedale Hanson-Young.

Kapoulas said: “We wanted to finish this tournament on our own terms.

“We wanted to be focused and to put together a good, 40-minute performance and I think we did that.

“We were good defensively and moved the ball on offence, creating good looks at the basket. We wanted to finish strong.”

He added: “I am so proud of the way this team has carried itself, not just in this game but throughout the 30 days we have been together from the preparation to the tournament. Everybody has worked very hard and created a real family environment. Not just the players but all the staff behind the scenes.

“We wanted to finish in the top three. Did we come up short? Yes, but we put ourselves in the position to play Greece for first place in our group and to reach the semi-final.

“This was not just about the outcome. It was about the process of getting better and building a programme that guys want to be a part of.”

GB were very active defensively in the early stages and came up with four steals during a 9-2 run. Josh Steel netted the first 3-pointer of the game before Hanson-Young added two late scores to give his side an 18-9 advantage after the opening 10 minutes.

Georgia closed to within six points early in the second but that was as close as they would get in the period as GB pulled away with a 13-4 run that included eight points from Deane Williams. The final four points also went the way of GB as they took a commanding 37-21 advantage into the interval.

GB continued their momentum in the second half and used a dominant 20-2 spell in the third to take their lead beyond 30 points. Steel and Lawson both scored seven points during the period to move into double figures, while Hanson-Young followed suit with the final score to put GB 63-30 ahead going into the fourth.

The game was already beyond doubt, but GB continued to add to their advantage and edged the final quarter 14-11 to complete a convincing 36-point win.

GB held their opponents to below 30% shooting from the field and forced 22 turnovers during the contest in a strong defensive effort.