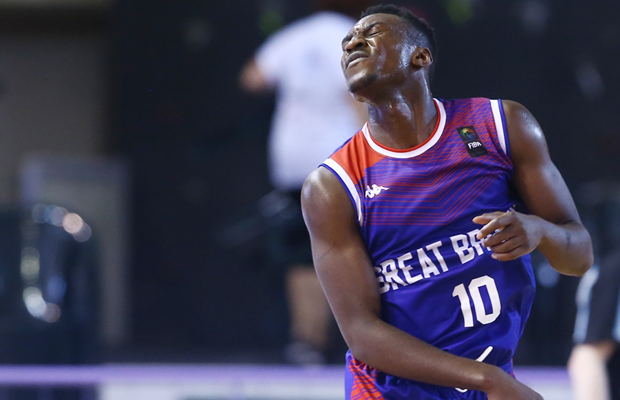 Great Britain Under-20s’ hopes for promotion were dashed by Croatia on Friday afternoon, as they fell 69-53 at the hands of Croatia in the quarter finals of the Division B FIBA European Championship in Chalkida, Greece.

Poor shooting from beyond the arc (10% – 2/20) and rebounding struggles leaves Andreas Kapoulas’ side now aiming for a best possible finish of fifth, as they take on Poland in their next game on Saturday at 18:45 local time.

“It’s a bit tough to take at the moment,” said Kapoulas.

“I’m very proud of the guys, not just the way they played this game but the overall commitment they have shown throughout the European Championship.

“Croatia is a team that has been averaging 85 points-per-game throughout the competition and we limited them to 69. We said before the game that if we kept them in the 60s we had a chance.

“Defensively we were quite good, apart from the start of the first and third quarters. Offensively, we were not able to get it going and did not get within striking distance.

“We have learned a lot during this tournament and this group has shown a lot of resilience.

“We have two more games now and we want to win them and go out on a high.”

It was Croatia who drew first blood, jumping out to an early 13-6 lead, before Jules Dang Akodo and Sam Idowu combined to score 9 points for GB and close out the quarter down by 5, 20-15.

The second period saw both teams struggle to get going, before Croatia started to find their rhythm, getting their first double digit lead of the game, which they would not give up the rest of the way.

Croatia used a 9-0 run in the third period to further increase their cushion and despite a stronger fourth from GB, it was too late with their fate already sealed.