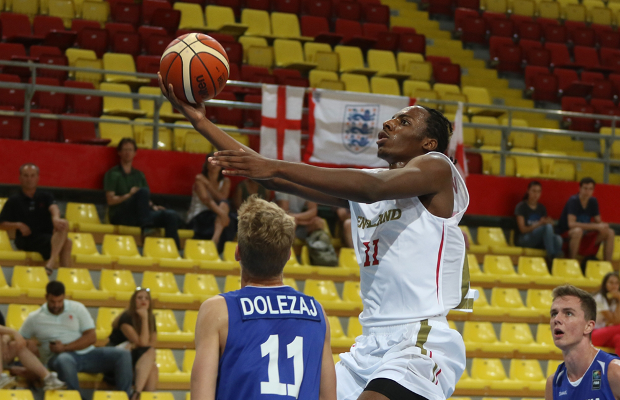 England Under-18’s suffered their third consecutive defeat at the European Championships in Skopje, Macedonia, after losing 76-70 against Georgia on Sunday evening.

Steve Bucknall’s side led by as many as 15 points but coughed up 28 turnovers during the contest with a second half turnaround leaving England 0-3 in Group D with two games to go.

Nelson Boachie-Yiadom finished with 14 points and 12 rebounds, while Carl Wheatle also added a double-double with 13 points along with 14 boards.

After Wheatle scored the opening four points of the game, Henri Langton followed with the next five and Luke Mitchell netted back-to-back triples in a 15-8 start for England.

The strong start continued with the offence in full flow as England opened up a commanding 29-15 advantage at the end of the opening quarter.

Despite a slow early period in the second, England maintained the double digit gap and Boachie-Yiadom completed his double-double shortly before the break with his 10 points and 10 rebounds helping his side into a 44-32 lead at half-time.

However, the game was completely flipped on its head in the second half as Georgia stormed into the lead with a 19-4 run in the third period and England would trail 56-52 heading into the final 10 minutes.

England closed to within two points on more than one occasion in the fourth but were kept at bay by Georgia’s outside shooting. An 8-2 run proved decisive and the game was wrapped up down the stretch.

In their second Group D encounter on Saturday, England suffered a 59-48 loss at the hands of the Slovak Republic with Brian Amabilino top scoring with 13 points in the defeat.

England U18s are now next in action on Tuesday at 1:15pm UK time against Scotland.