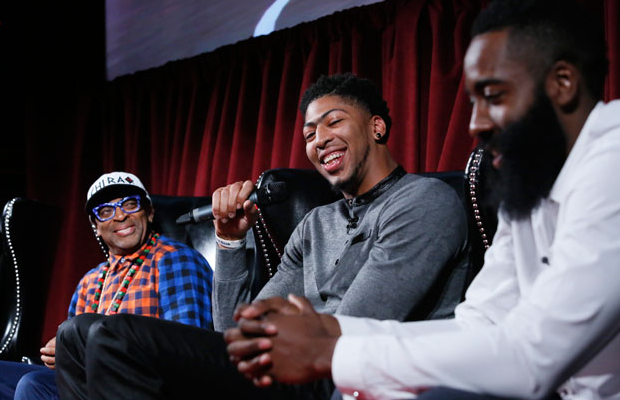 The three NBA superstars took to the event’s red carpet after joining Inside the NBA co-workers Ernie Johnson and Shaquille O’Neal and ‘Be The Story’ creator Spike Lee on stage for a game presentation in front of assembled press and guests.

Curry (93), Davis and Harden (both 92) are the top rated players on the game behind 94-rated LeBron James with 2K confirming the top-10 list earlier this week. 2013-14 NBA MVP Kevin Durant is fifth on the list with a rating of 91 while Chris Paul also makes it into the 90’s elite with his rating.

The 10 overall ratings in #NBA2K16. What do you think? Let the debates begin. pic.twitter.com/qGyUIHajzA

2K also gave an exclusive reveal of their ‘Momentous’ trailer in NYC with Chris Bosh’s video-bombing (see below) going down a treat with the audience in one of many inspired touches on the latest version of the world renowned video game.

Shaq was his usual entertaining self, while AD reluctantly admitting to having bought a monkey sent Curry into uncontrollable laughter in a rather light-hearted presentation panel.

The NBA trio all spoke of their pride of being on the cover and answered questions on their own career’s in reference to that of Spike Lee’s created character Frequency Vibrations, better known as ‘Freak’ in the ‘My Career’ mode.

That particular feature on the game involves college basketball with ten NCAA D1 schools available to play with including the likes of Kansas, UCLA, Villanova and Arizona following the high school path.

The option to play as European sides is once again available with reigning Euroleague champions Real Madrid one of 25 teams. Eight of those are new to the game with the likes of Valencia, Limoges and Neptunas all included based on the 2014-15 competition.

A new and intriguing feature for this year’s game involves being able to move location with an NBA franchise during the season. If you go for a radical move causing you to move Conference and subsequently moving division, the game will adjust accordingly.

Teams are also split into one of four different categories of Contending; Rebuilding; Buying or Selling which can change throughout a season with improved trade responses with AI teams.

Check out the latest trailer ahead of Tuesday’s retail release:

We would like to thank 2K UK for our invite to the event!