Around the NBL - Week 2 Recap - Hoopsfix.com

Around the NBL – Week 2 Recap 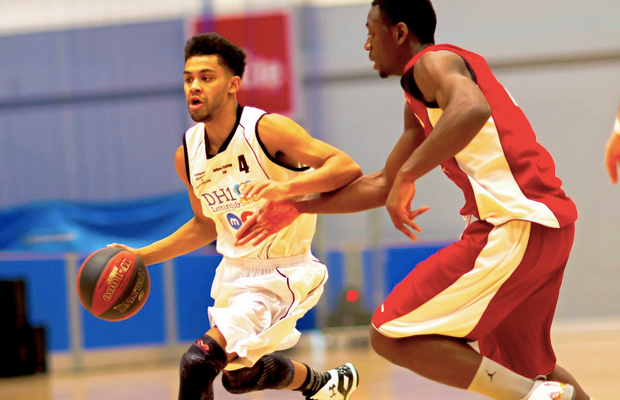 Check out the latest action across the NBL as the cup competitions continue before the start of the league campaigns.

The majority of the Men’s National Cup First Round games took place with Division 1 league champions Essex Leopards surviving a huge scare as they narrowly saw off NBDL opposition Southwark Pride with an 87-86 road win. The Leopards left it late to snatch the win despite an impressive 34 points from Amin Adamu.

Captain Danny Carter led Reading Rockets to a resounding 108-52 home win over Oxford City Hoops with a game-high of 32 points. Defending champions Manchester Magic had five scorers in double figures as they recorded a 79-58 home win against Prestons College Titans with Alvaro Alarcon Lizaur the top scorer with 15 points. England Under-16 international Kaiyem Cleary weighed in with 10 points from the bench in extended minutes.

Lancashire Spinners continued their winning start to the season after beating University of Chester 74-48 with Connor Murtagh leading the way with 16 points, while young duo George Darling and Kyle Carey added 14 and 13 points respectively. Worthing Thunder recorded a convincing 88-43 win at Sussex Bears, while Kent Crusaders claimed their first win of the season after beating Folkestone Saints 92-58.

Hemel Storm hit triple figures in their win at Cambridge Cats as Tom Adorian top scored with 23 points in their 106-61 victory. Matthew Martin and Oliver Hylands had a combined 51 points for Doncaster Danum Eagles as they threatened to come back from a 19-point half-time deficit before falling to an 89-81 loss at home to D1 side Bradford Dragons.

More D1 teams that tasted success included Leicester Warriors, who defeated City of Birmingham 92-57, and Westminster Warriors, who had 18 points from veteran Mike Martin in a 75-46 win at Brunel Ducks. Derby Trailblazers put up the highest points total in their 112-59 win against Northants Taurus with David Watts contributing 24 points.

Barking & Dagenham Thunder claimed a 66-60 road win at London Westside, while Newcastle Under Lyme College Knights were also victorious on their travels after seeing off Sporting Club Albion, 85-48. Shropshire Warriors overcame Worcester Wolves II 97-88, in a high-scoring encounter, despite a 40-point display from Caylin Raftopolous.

Leigh Greenan led Ipswich to a comfortable 100-86 home win over Kings Lynn Fury with 27 points and 15 rebounds while Tom Sadler and Sam Newman each added 19 points apiece. Nottingham Hoods cruised to a 78-48 win at Leeds Force Academy and London Greenhouse Pioneers also eased their way into the next round by crushing Oxford Stealers 91-53.

Another D2 team advanced as Killamarsh Derbyshire Arrows powered past Sheffield Hallam Sharks with a 101-53 victory. American guard Alex Burt had a game-high 26 points with Joseph Baugh adding 24 as the duo combined for half a century. Brentwood Fire claimed a rival win on the road after beating Essex Blades 86-70 while Dagenham Dragons recorded an impressive 80-75 win at Brixton Topcats behind Lamar Roberts’ 21 points.

Liverpool edged out Myerscough College 93-88 to progress, while Coventry Tornadoes pulled out a 74-59 win on the road at Birmingham Mets and Bristol Academy Flyers II defeated Swindon Shock 78-56. D1 teams Tees Valley Mohawks and Team Northumbria received byes into the Second Round, where they will meet next, with Plymouth Raiders II and Greenwich Titans also handed walkovers.

Prior to Sunday’s Cup action, the National Trophy had continued with five more group games. Lancashire Spinners are the early frontrunners in the North Group after picking up their second win courtesy of a 76-64 triumph at home to Team Northumbria. With points spread across the board, Steven Gayle top scored with 14 points while England under-18 international Alex Roberts added 13.

Elswehere in the North, defending champions Manchester Magic bounced back from their opening loss to the Spinners by coming away from their trip to the Tees Valley Mohawks with a 79-59 victory. Bradford Dragons also enjoyed their travels after defeating Leicester Warriors 94-87 despite a 28-point haul from Kieran Mills. Jermayne Laing led the way for the Dragons with 26 points while Henri Bongoma added 20 points and Spanish guard Adria Rodriguez Vinas weighed in with a further 17.

“I’m happy with the win,” said Dragons Head Coach Chris Mellor. “We started well at both ends of the court and I thought we controlled the game at our own pace. But, we made a lot of defensive mistakes and we fatigued towards the end, due to the starters having to play big minutes. Leicester are still waiting for key players to arrive, but it’s something for us to build upon.”

In the South, Essex Leopards got their season off to a winning start after seeing off the challenge of London Lituanica with a hard-fought 76-73 success. New signing Justin Hitchman stepped up with 21 points while there were valuable contributions from returning duo Albert Margai and Will Ashby, who had 16 and 11 points respectively. There was also a first win for Worthing Thunder as Tom Ward impressed with 33 points to lead his side to an 84-70 victory over Kent Crusaders, who had 17 points from RJ Eytle-Rock. Thunder’s Louis Allen also chimed in with 20 points in the win to get them up and running in the competition.

The Patrons Cup action continued with Loughborough Student Riders easing past Nottingham Hoods in Pool 2 with a 93-56 victory. Raheem May-Thompson turned out for Loughborough and scored 23 points in the win, including this poster dunk: