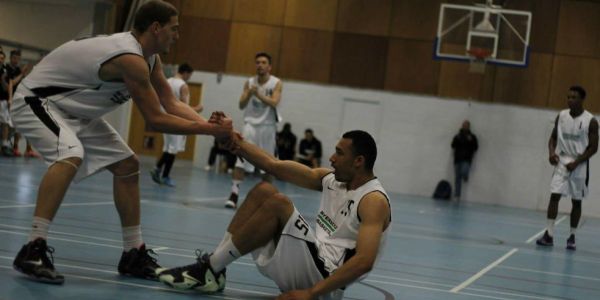 It will be SGS College vs Preston College and Myerscough College vs Charnwood College in the 2015 EABL Final Four this Friday at UEL Sports Dock (5pm and 7pm tips – free entry!) after the Elite Eight games were played last week.

Here is a round up of all the games:

SGS College progressed to the EABL Final Four for the third consecutive year with a convincing 99 to 65 performance over last season’s semi-finalists Milton Keynes.

The Bristol side outscored the visitors 30 to 19 at the end of the first quarter and went to the half time break leading by 20, 51 to 31. MK cut the deficit to as low as 10 points in the 3rd quarter but a dominating 29 to 10 fourth quarter for SGS put away the visitors hopes of an upset.

Dwayne Lautier-Ogunleye led all scorers for SGS with 28 points while Deane Williams and Tamas Okros added 14 each.

Lautier-Ogunleye was pleased to see his side reaching the EABL Final Four for a third straight year:

‘It is a great to return to the Final Four at UEL. Last season we were one shot away from winning the whole thing and all season we have been preparing for this moment.’

‘The Final Four will be the last time we will all be together and all of us want to make it a special memory to remember.’

For the visitors Harvey was top scorer with 27 while Callum Rodger added 13.

Preston College punched their ticket to the Final Four after putting in a complete team performance in dismantling Copleston, 81-66.

England U18 standout Kyle Carey fuelled a 19 point, 5 rebound performance and was supported by Joel Ufele’s 13 points and Jonathan Joseph’s near triple-double of 12 points, 12 assists and 6 boards.

In what was billed as a matchup featuring the high scoring duo of Sam Newman and Luke Mascall-Wright, who between them averaged just a shade below 54 points per game, the hosts ignored all the pregame hype surrounding the duo, holding them 19 and 9 points respectively.

Defensive was the mantra of the day as Preston out-rebounded the visitors 50-26, nineteen on the offensive end, and added seven blocks to the mix too.

Coach Malcolm Leak, who so often has preached defensive integrity, was notably impressed with the team performance.

“I thought we were focused on the task at hand,” he commented. “We worked hard on our conditioning and intensity all week in the run up to this game and it paid off. Hats off to Copleston, they were a great team with a great guard in Sam and Luke but we shut them down and made everyone else beat us.”

“Jonny [Joseph] had 12 assists and played unselfishly,” continued Leak. “But it was the best team effort all year. Everyone played well from bigs to guards. Everyone contributed today which was good.”

Myerscough College booked their place in the EABL Final Four with a 73-71 victory over defending champions Barking Abbey on Wednesday at Myerscough.

Earl Russell hit the game winning lay up inside with six seconds remaining and Barking Abbey were unable to respond, with two consecutive turnovers on crucial plays as Myerscough advanced to the Final Four for the first time in the programme’s short history.

Tadhg Hickey caused problems for BA all game, finishing with 17 points to lead Myerscough, while Chris Bwana added 16, as Myerscough stormed the floor when the final horn sounded to celebrate their victory.

“We knew exactly how hard it was going to be,” said Myerscough Head Coach Neal Hopkins.

“Barking are without doubt the toughest team we have come up against and have all the pieces. Coach (Lloyd) Gardner and his staff have have done an incredible job this year and run an outstanding programme but my guys once again exceeded all expectations, we made big plays when it counted in an intense game where there were no freebies and held our nerve at the end, I can’t tell you how proud I am.”

Akwasi Yeboah had 19 points and 9 rebounds to lead BA, including the game tying three out of a timeout with 20.6 seconds remaining, while big man Nathan Smith was a force inside with 17 points, 8 rebounds and 5 blocks.

Charnwood College were able to hand Itchen College their first home loss 68-61 in the quarter final of the EABL playoffs to book their place in the Final Fours.

Charnwood were able to set the tone in the first quarter with aggressive perimeter defence that stifled the home team’s guard play, as Henri Langton and Josh McSwiggan had 15 points a piece to lead Charnwood to the win.

Itchen were able to close the gap to 4 early in the 3rd quarter before unanswered 3’s from Hafeez Abdul and E. Burton saw the visiting side widen the lead. Another late run from Itchen saw the gap close to 4 points and the 3rd quarter finished 57-53.

Itchen failed to convert on a number of late attempts as they went for the comeback, as Charnwood punched their ticket to the Final Four for the second consecutive year.

“Charnwood were fantastic defensively, they had scouted us well and put our guards under an enormous amount of pressure. We needed to be much better moving the ball out of Pick & roll situations and converting on the interior, especially down the stretch,” said Itchen Head Coach Matt Guymon.

“Charnwood really hurt us from outside today, connecting 10 times from the 3. They had so many guys step up and make big shots, it was difficult for us to lock in defensively. As soon as we stretched our defence to guard the perimeter McSwiggan and Langton punished us on the inside, it was a case of pick your poison.”

” I am very proud of what my guys have achieved this year, we have 11 home grown players and we have proven all season that we belong with the top academies in the country.”

Check out the official EABL website here for more info.