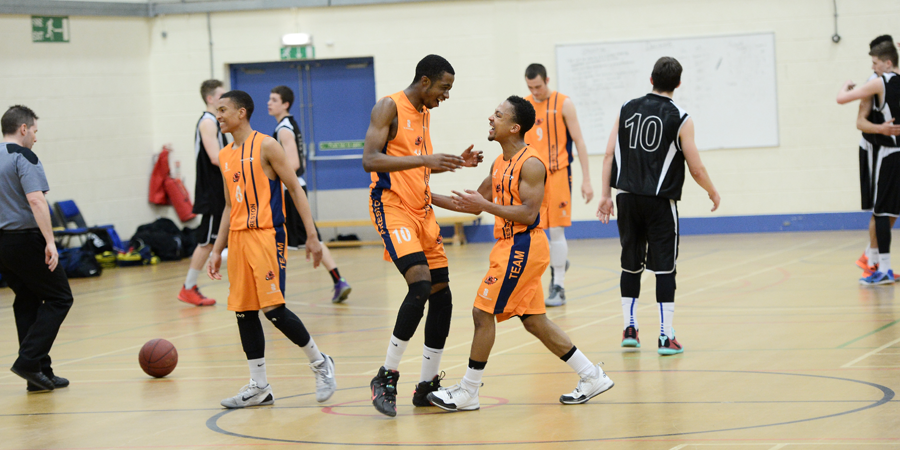 With the Elite Eight in the books, our Final Four is set, with Charnwood College taking on Myerscough College at 5pm and SGS College facing off against Preston College at 7pm on Friday at UEL Sports Dock.

Number one seed from the North, Myerscough College, ride into the Final Four on a high after a73-71 win over defending champions Barking Abbey in the Elite Eight last week.

After dominating Moulton in their playoff opener, Myerscough escaped a tough BA side to set up a meeting with third seed from the North, Charnwood College.

“We are really excited to be taking part in the EABL final fours,” said Neal Hopkins, who heads up a balanced Myerscough side with seven players who average more than 9 points, led by Montel Dennnis’ 15 a game.

“The guys have worked incredibly hard this year and I think this is just reward – we know Charnwood is going to be a tough game, they have some key pieces and depth, we will have to be at our best to beat them – it’s important that my guys are focused and don’t get flustered by the occasion if we have the right mind set we have a good chance of advancing the the final.”

Charnwood also routed their playoff opener, cruising past Loreto, before getting a seven point win over Itchen in the Elite Eight – the only lower seed to win in the playoffs so far.

The only time these two teams met in the EABL regular season, Myerscough got a 20 point victory, 82-62, and are aware they are underdogs going into the game.

“Myerscough are understandably favourites heading in to the game after the season that they have had,” said Charnwood Head Coach Josh Merrington.

“They are a well-coached team who are extremely deep and can hurt you in a variety of ways, with different guys stepping up on different nights. I’m really happy with how we have played in our first two playoff games, and it’s great to see the team continue to improve at this late stage of the season.

“We know we’ll need to play better than we have in our previous two games against them, especially on the defensive end. This is a confident group and we’re in a nice rhythm at the moment, I have no doubt they’ll give everything they have on Friday night.”

“It’s a great occasion as we have the top four U19 sides coming together for what will be a great weekend of basketball action,” said SGS Head Coach Andreas Kapoulas.

“This is our third consecutive final four and both previous times we have reached the final but have not been able to go all the way. Last year it came down to the last shot in what was a great advertisement for EABL and basketball in England. Our team all year has been motivated to return to the Final. Preston are a very talented and well coached side. They have done very well this season and no question they will be a tough opponent.’

“I think that they’ve got two good players in Dwayne and Tamas, on this level of basketball they are outstanding players.

“We’ve just got to come in and play our basketball.

“We played them in bath last year and they beat us by 3 points, to me it’s a comeback game, to see have we improved? Have we got better? I’m just waiting for the game, when the chips fall I just want both teams to play their hearts out, and see what we can bring to EABL and the fans here in England.”

Make sure you get down to UEL Sports Dock this Friday to watch the culmination of the EABL – Charnwood vs Myerscough tip off at 5pm, with SGS vs Preston at 7pm – entry is entirely free! Join the Facebook event here.