After coming through the Brighton Bears program, Ben Mockford attended one of the most prestigious basketball schools in America, Oak Hill Academy, which has seen several college basketball legends such as Carmelo Anthony and Rajon Rondo walk through its doors. The school is a feeder system for many top colleges and has the distinction of having a player on the last four NCAA championship teams.

It was a tough situation but Mockford got his wish playing against “NBA ready players” right from the start. This made him tougher and he learned some valuable lessons, such as playing confidently on the court, from an emerging star and YouTube sensation, Brandon Jennings.

After playing at Oak Hill, Mockford wanted to show how much he had progressed so instead of enrolling in college immediately, the 6’2” guard spent a post graduate year at Apex where he averaged an eye opening 31.5 points and six assists a game.

He then attended Iona College before transferring to St Francis (NY) Terriers, after his coach left for Seton Hall.  Mockford liked his chances with the Terriers after meeting first year coach, Glenn Braica, and also learning that the leading scorer, a shooting guard, would graduate the following year.

After sitting out a year, the penalty for transferring, Mockford was inserted into the starting line-up and helped St Francis to one of its most successful seasons in years. The Terriers were picked to finish eleventh in the twelve team Northeastern conference but surprised everyone by placing fourth.

Mockford was the leading scorer with 11.8 points a game, only two tenths more than the next player as scoring was done by committee. He did have at least five games where he scored twenty or more points. His best game was an away victory against Sacred Heart.

“I had 29 [actually 28] points and lead our team to the win,” said Mockford. “That game was pivotal in our season too. Winning on the road is important when conference games come around.”

This victory would set the team on a streak, winning nine of ten games, giving them a great start in conference play. The next two losses were hard as it was against their conference rivals in the annual meeting aptly called the Battle of Brooklyn. 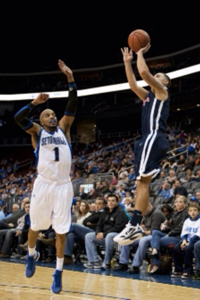 “Battle of Brooklyn is between St Francis and LIU. It’s been going on for years and creates a lot of buzz in Brooklyn with the media and fans. Last year we played at MSG and this year it is held at the Barclay Center, Brooklyn Nets new arena. The games are always close and have a certain atmosphere that can only be felt in Brooklyn. It is always hyped and the fans really get into the game. It is always a show.”

At the time St Francis was 10-2 in conference and just a game behind Long Island University, a program on the rise after making two consecutive NCAA tournament appearances. The rivalry stems from both colleges being from Brooklyn and goes back as far as 1975. St Francis needs to make up ground as LIU leads the series, 21-16.

Only the first game was played in Madison Square Garden and although Mockford scored twenty points in this historic venue, they would lose by nine. Four days later he would score fourteen points in a two point loss on LIU’s home court.

He is looking forward to the rematch but right now his focus is on the season ahead.

“Like I said those games always have a certain buzz about them. Our team is strong this year but we still have to handle our business first. Those games aren’t for a while but they are always in the back of your mind. We have plenty of games before Battle of Brooklyn so that’s not our focus right now but, when it comes, best believe we will be ready.”

The Terriers have been picked to finish fifth in conference by the Northeast Conference men’s basketball coaches but Mockford doesn’t concern himself with predictions.

“We just try and worry about ourselves and what we can control,” says the West Sussex product. “That’s going hard in practice every day and improving as a team. Predictions and rankings are great for the media, but we don’t pay attention to them. We take it one game at a time, any team can win on any night and you can’t take any days off otherwise you will get beat. I believe in our team and our abilities, as long as we are all on the same page, I’m confident we will do well.

The GB Futures guard knows only too well what it means to stay focused. They lost the last three games, to end the season, against teams they had previously beaten. “The season is a grind, you have to maintain focus and conditioning the whole year,” he explained when looking back on last season. “I felt like our team kind of lost our legs at the end of the year, and unfortunately that’s how it goes sometimes. I feel like our preparation this year has been great, everyone is in great shape, and ready to go and compete for this championship. We have to finish strong this year, and I believe we will.

With a full season as a starter under his belt, he hopes to keep improving not just as a team but individually. He plays shooting guard best as that’s the position he has played the last two years but can play point guard and considers himself a combo guard. Just don’t make the mistake of calling him a spot up shooter.

“Shooting is what I do best. I wouldn’t say I’m your typical spot up shooter; my game is different to that. I am a basketball player. I don’t just knock down open threes. I create for myself most of the time. Everyone has their own opinion. Easiest way is to watch me play.”

He happens to play for a team that has all the qualities of an underdog, especially with an undersized front court, yet under Coach Braica, they have kept overachieving. The ultimate goal for this team would be to make the NCAA tournament. Something they have never done even though they claim to be the oldest collegiate program in New York City.

The easiest way to rectify this is to win their conference tournament but they will have to go through LIU who have once again been predicted to win the conference. It will be a tough battle, but as pointed out, he does not believe in predictions.

Coach Braica, the reigning conference coach of the year, said “We had a very good conference record last year so I feel with a year of maturity our team should be much better.”

They probably won’t be able to sneak up on anyone this season though.