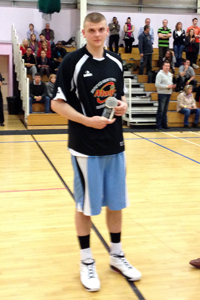 The 6’9″ forward has accepted a scholarship to Seattle, whose coaching staff were in Cherbourg at Easter scouting him as he played for Manchester.

He told Hoopsfix why he chose the school that has recently been accepted into the Western Athletic Conference:

“The high academics, and the effort they made to come and see my family, but also the fact they are going into the WAC and are going to have the most competitive schedule. I also think that’s where I’ll have the chance to improve the most.

“(I’m looking forward to) just getting to go against bigger stronger guys week in week out.”

Before heading stateside, the 2012 Under-18 National Cup MVP will likely be battling it out for a spot on the Great Britain Under 20 team that will be competing in Bulgaria this summer.

Jack averaged 4.6 points and 5.3 rebounds in under 14 minutes per game last summer at the Division B European Championships that were also in Bulgaria, including a 12 point, 12 rebound, 2 block performance against Georgia. This season he played for both the Manchester Magic Under 18s and Division 3 side that have gained promotion for next season. He also received interest from Maine, New Hampshire and Colgate amongst others.

Hoopsfix wants to wish Jack all the best with his college experience – we will be following!