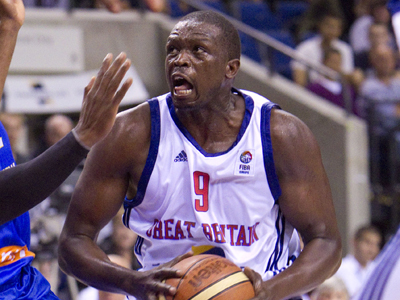 Luol Deng had a GB record 38 points in the win

Great Britain booked their second straight trip to Eurobasket last night, with a 94-85 overtime victory over Bosnia & Herzegovina at the Echo Arena, Liverpool.

It was Luol Deng and Pops Mensah-Bonsu who shined for GB, combining for a spectacular 70 points and 34 rebounds. Deng finished with a GB international scoring record of 38 points adding 13 rebounds, whilst Mensah-Bonsu had a huge double double of 32 points, 21 rebounds whilst also adding 4 blocked shots.

Pops played the hero in regulation, securing a huge offensive rebound off a missed Deng free throw to go to the line and sink both free throws with 18 seconds left to tie the game. A good defensive possession saw Bosnia unable to score to send the game to OT.

After remaining close in the first 2 minutes of overtime, GB showed their resilience overpowering Bosnia & Herzegovina to close out the game, with a ridiculous Mensah-Bonsu reverse alley oop from Luol Deng providing the exclamation point to give them a 7 point lead with just over a minute remaining.

“Our team has great character. We all believed we could win every game even when we were down late. We responded well and made the hustle plays. Drew [Sullivan] got good stops, Pops made some huge plays and Luol was superb for us. But over all we have a mentally tough group of players.”

Qualification for Eurobasket 2011 sends a strong statement to FIBA/the IOC about our competitiveness in terms of securing a place at London 2012. Finch put it best when asked about his team’s prospects of playing at the London Olympics.

“We’ve met every performance marker they’ve laid down, we believe we’re entitled to our rightful spot by the way we play.”

Full box score and play by play available here. GB now stand 6-1 and will look to secure the top spot in their group this Sunday when they take on Ukraine away.