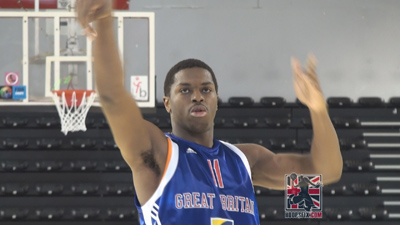 Bryan-Amaning once again starred for GB

The GB U23’s took care of business on the final day of the International Future Challenge in Lille, France, dispatching of Luxembourg 90-61.

It was never in doubt as GB went up 9-0 to start the game and never relinquished the lead, stretching it to as much as 32. The win against Luxembourg, coupled with France’s victory over Belgium, gave them a second place finish in the tournament (out of four teams).

Matthew Bryan-Amaning once again led all scorers with 25 points shooting an efficient 11/18 from the floor and pulling down 8 rebounds, whilst Ashley Hamilton had another double double with 13 and 10 boards.

“The guys really played hard today and they refused to take their foot off the gas which was great. As each game progressed our defensive effort became more consistent, and today we shot well from the perimeter as well as going inside. A few guys here have really stepped up to the plate and are in contention to be added to the senior squad for next month.”

-Bryan-Amaning said to me yesterday he would be ‘chillin’ in this game. If chillin is goin off for 25 whilst dunkin on people for fun then I worry what going hard is.

-Luxembourg were the most positive, upbeat and ‘together’ team in the tournament. To be being blown out by 30 every game can’t be fun, yet they always played hard and never once put their heads down.

-A ton of highlights in this one, hard to pick one play of the game, but it would be out of a Bryan-Amaning one handed flush on a hapless Luxembourg defender or an alley oop connection from Matthew to Ashley that was finished ferociously.

-There were a few struggles defensively, way too many easy, uncontested layups.

-Other scorers; Adegboye, Robinson and Eaves all had 14 points each, Andy Thompson had 7 points and 8 rebounds (5 offensive), Colin Sing had 3, whilst Devan Bailey and Liam Potter went scoreless although Potter did grab 6 rebounds.

-I once again live streamed the game; the recording of that live stream is available to view here if you missed it.