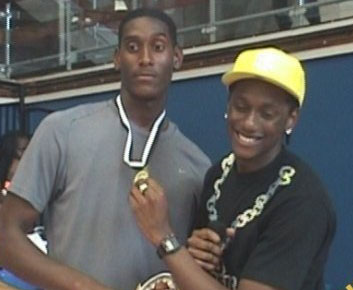 The Joe White Classic Dunk Contest  had a pretty good lineup. Elliot ‘Air Vandal’ Kelchure, the 5’9 jumping sensation, Tayo ‘Chosen’ Odulaja and Leon Bernard, UK dunking legends for years now, Robert Gilchrist, arguably the most athletic under 18 player in the country and Warren Francis, a young leaper on the rise outta London who is gonna be on the scene for years to come. This had the potential to be one of the best dunk contests we have seen in a long time. Unfortunately it didn’t quite materialise..it had it’s moments (see Air Vandal’s first windmill-head at the rim!) but there were far too many missed dunks (including this Bernard dunk which bought the rim down!). Robert Gilchrist the deserved winner for being, by far the most consistent dunker throughout.