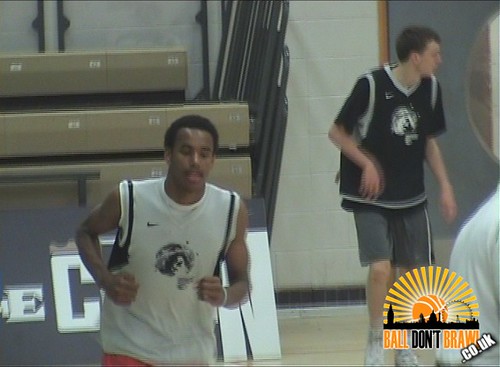 Raheem caught our attention this Summer at Midnight Madness

Welcome to the first of many Ball Don’t Brawl player diaries, where some of Britain’s finest ballers will be keeping us all up to date with their season’s progress. We kick things off with Liverpool’s finest Raheem May-Thompson, a versatile 6’6 forward about to start his season at D-1 school Qunnipiac. He first caught our attention at Midnight Madness Liverpool where he straight up DOMINATED. Is he ready for the next level? We believe so.

This is Raheem ‘The Dream’ May-Thompson, just passing through and letting you all know about me and what I’ve been up to. Just to introduce myself, I was born in London where basketball wasn’t my first sport, it was only once I moved to Liverpool when I was twelve that I truly got into basketball. I played for Liverpool basketball club and that put me on the tracks for where I am now. Once I finished secondary school I moved out to the states to play ball and attended DeMatha Catholic High School (for those that don’t know, it is has one of  the most prestigious High School basketball programs in the country and the school has the second best ranked athletic program in the US for 2009-Ed) for a year and Towson Catholic High School the next year.

Now I’m in college though, I go to Quinnipiac University; it’s so different and more challenging. This is the next level; guys are bigger and more skilled than last year in high school. Quinnipiac is located in Hamden, Connecticut, they play in the North Eastern Conference (NEC) and are a mid-major Division 1 school. Right now though I’m just adjusting getting used to college life, away from everyone I knew and just living on campus. We are working out five times a week just getting ready for the season which officially starts October 16th with our midnight madness. Then we will have full practice which will be more intense and harder, with our opening game against Hartford. As of now though I’m just concentrating on my school work, the transition from high school to college is fun, but you have to remain focused, it’s so easy to fall off and lose sight of what’s important. There are so many chances to fall off and forget about what’s important, I’m just keeping in mind what I want with this team. Were predicted to come first in the NEC (North Eastern Conference) which is a challenging conference, so to be ranked in that spot were given a big target on our backs, we just have to produce and show why were ranked 1st for the pre-season.

So far my experience at Quinnipiac has been crazy, I came up here on an official visit a week before school started and made a verbal commitment to them whilst I was here. That was a crazy weekend; at the time I was still in London and I flew out here for the weekend to come see the school and what they were all about, I had a great time and fell in love with the campus and facilities. I went back home after that weekend and 2 days later flew back out here to start school, everything was so last minute but I believe it was one of the best decisions I have ever made.

This is something I didn’t even dream about when I was back in England, who knew I’d be in America playing college ball five years ago, this just seems so out of this world. It’s a dream come true, but I haven’t gotten anywhere yet, still got to keep pushing and improve, I can’t afford to get complacent now I’m here. Need to keep pushing and stay hungry, you can never be satisfied when you’re playing sports at a high level; there are always guys behind you trying to outwork you.

Anyway I’m just trying to share my college life so far with you; I got crazy homework to do right now so I’m out people, until next time, peace.