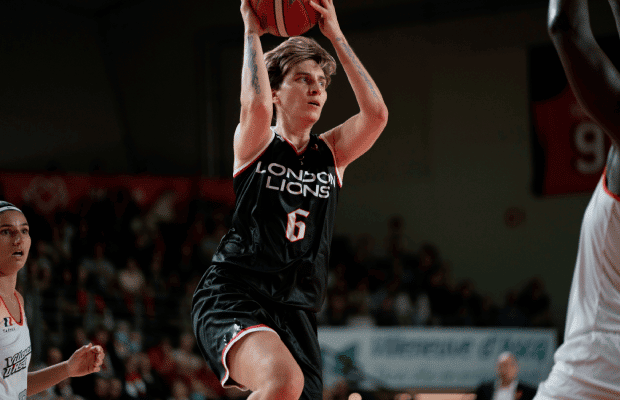 London Lions made a bright start to their EuroCup Women opener on Wednesday before falling to an 80-59 defeat on the road against experienced French side ESBVA.

Mark Clark’s side – who received automatic entry to the regular season – conceded 51 points through the middle periods as their opening salvo was undone in the Group J clash.

Belarusian veteran Katsiaryna Snytsina made a long-awaited competitive debut for the club and top scored with 16 points as the only scorer in double figures for the visitors.

Kiki Herbert-Harrigan bookended an early 9-0 run with triples with Holly Winterburn, Kennedy Leonard and Snytsina also connecting from outside in a 15-7 start from the Lions. They were 5 of 7 from three-point range in the spell, but would only make two of their next 18 attempts.

London held onto their early advantage after 10 minutes and their lead peaked at 23-14 two minutes into the second following Paige Robinson’s putback.

However, the hosts began to hit their stride and soon moved ahead with a 14-5 burst. The two teams were locked at 30-30 before ESBVA scored the final nine points of the half to seize the initiative heading into the break.

The momentum carried into the third quarter as it was the home side’s turn to enjoy a barrage from beyond the arc as the gap quickly ballooned past 20 points at 63-42.

The Lions rallied defensively by keeping their opponents scoreless for over six minutes as they looked to reduce their deficit. The gap was cut to 12 at the midway point of the final quarter, but Villeneuve made another late burst to secure a final winning margin of 21.

Points difference can play a crucial role in qualification for the playoffs – as London know too well from last season – and the WBBL champions will look to get back on track next Thursday in their home opener against Roche Vendee.

– Lions starters: Leonard, Winterburn, Snytsina, Herbert-Harrigan, Stewart
– Four players made their ECW debut for London
– Roche Vendee beat Sassari 79-71 in the other Group J clash
– The top two teams in each group qualify for the playoffs
– There are also four spots for the best third-placed sides in each conference
– London will play all three home games at Crystal Palace