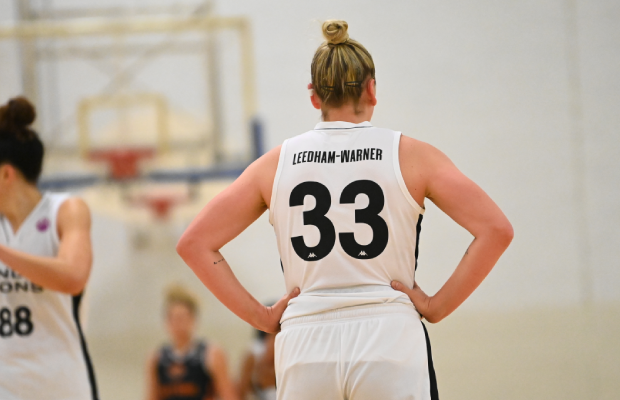 With 2021 drawing to a close, it’s time to reflect on the past 12 months as we pick out 10 memorable moments in British basketball in the women’s game.

London Lions pulled off one of the most memorable results in British basketball history as they defeated former EuroLeague/EuroCup winners Bourges in a stunning one-point victory at Crystal Palace. Mark Clark’s side upset the top-ranked team from the regular season to take a slender advantage into the reverse fixture in France – due to be played in the first week of the new year.

One of GB’s greats suiting up in the WBBL – a huge moment for the league as Jo Leedham-Warner was part of the Lions’ summer signings alongside fellow Olympian Azania Stewart and Holly Winterburn. The standard of the league continues to grow with the WBBL now in its eighth season. Leedham-Warner had to wait to make a debut and finally took to the court at the Copper Box in a league victory against Leicester.

It was May and it was certainly madness. The playoffs were held in central venues with all WBBL games shown live on Sky Sports for the first time. Newcastle made full use of home advantage in their opener with a stunning victory over second seeds Leicester Riders. And, if that wasn’t incredible enough, Chris Bunten’s side followed it up by knocking out the league champions, Sevenoaks Suns, to surge into the final – where they would lose to London Lions, who claimed a historic domestic double.

Hannah Jump made history by becoming the first British female to win the NCAA Tournament as Stanford held on for a dramatic 54-53 triumph. The former England Under-16 international played a key role during March Madness with a season-high 17 points along the way having been one of the most prolific three-point shooters across all of college.

It was a landmark occasion as London became the first women’s team to compete in Europe for over a decade and they exceeded any expectations with a dominant 30-point win over Gran Canaria in the first leg of the qualifiers at Crystal Palace. The Lions were without Jo Leedham-Warner, but rising star Holly Winterburn – who would make a GB Senior debut in November – top scored in the victory that paved the way to making it to the regular season – even with defeat in Spain in the second leg.

It was somewhat remarkable that the 2020-21 season was able to be completed in the midst of the global pandemic and Sevenoaks were one of the teams to take a short break at the start of the calendar year. That resulted in a backlog of fixtures, but Len Busch’s side reeled off 10 wins in a row in the space of a few weeks in April to seal another regular season title. Their quest for another perfect league campaign was foiled by Leicester in their penultimate fixture although take nothing away from a 19-1 record.

Alison Gorrell set a new single-game scoring high with a 40-point performance for Newcastle on the road against Essex Rebels back in January, 2021. Meanwhile, Kennedy Leonard has been a revelation in the league – becoming the first player to record over 200 assists in a league campaign and twice breaking the record for assists in a game; first with 21 against Caledonia before going one better with 22 this season.

Ipswich came out on top in a defensive duel as they defeated CoLA by 18 to take the WNBL D1 playoffs title, in Nottingham. Esther Little starred as MVP in her final game before heading to Gonzaga, while Harriet Welham also signed off with a typically key performance. The duo had also both recorded triple-doubles in the same game earlier in the season, while Ava Battese recently fired in 11 triples in a 41-point haul as Ipswich were prominent in some of the individual performances of the year.

The quartet of Temi Fagbenle, Chantelle Handy, Shequila Joseph and Shanice Beckford-Norton helped GB advance to the 3×3 FIBA Europe Cup finals as they came through the qualifier in Romania in the summer. GB were making their international debut in the format and also fielded a team in the U23 qualifiers.

Temi Fagbenle was agonisingly close to adding a EuroCup title to an impressive resume. The GB star helped Reyer Venezia reach the final and finished with 12 points in the Championship clash as the Italian side fell to defeat in the final seconds against Valencia. Fagbenle is back in the competition this season alongside Kristine Anigwe at Mersin.

Honourable mention(s):
Gloucester City Queens enjoyed instant success on their league debut in the WBBL with victory over Cardiff Met Archers, while Sheffield Hatters returned from a year hiatus and there was deserved recognition for Betty Codona in being awarded BBC Yorkshire’s Unsung Hero for 2021.