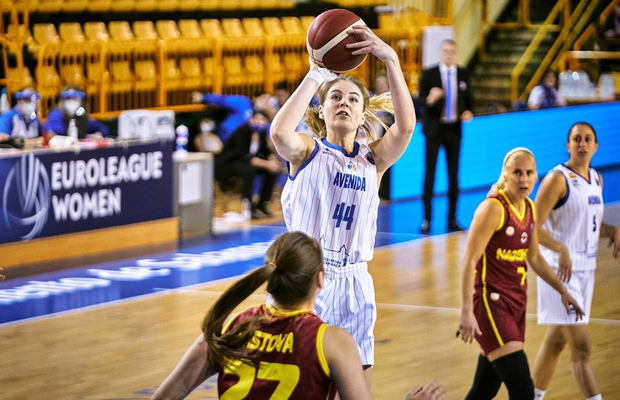 GB internationals Karlie Samuelson, Temi Fagbenle and Cheridene Green all advanced to the knockout stages of their respective European competitions this week.

Samuelson helped Spanish side Perfumerias Avenida reach the quarter final stage of EuroLeague Women as they secured top spot in Group A with a game to spare.

The 25-year-old sharpshooter hit three triples for nine points in a 93-38 victory – one of three inside four days as they moved to 5-0, following two wins in the first hub in December.

Meanwhile, Fagbenle and Green will meet in the Round of 16 in EuroCup Women action as Reyer Venezia and Gorzow also came through three games in four days to start their campaigns.

Venezia are the top seeds heading into the playoffs in March as they eased to a 3-0 record through the group phase with Fagbenle displaying her all-round skillset with 7.0 points, 6.0 rebounds and 3.7 assists in 19.6 minutes per game.

Despite back-to-back defeats, Gorzow snuck in as the final qualifier to the next round with a 97-76 victory behind Green’s double-double of 13 points and 12 rebounds, as well as five assists, to secure second spot via a three-way tie.

All three players are also enjoying solid domestic campaigns with Fagbenle and Samuelson yet to suffer a league defeat with Venezia 16-0 in Italy, while Avenida are flying high in Spain with 20 wins from 20 in the LFB.