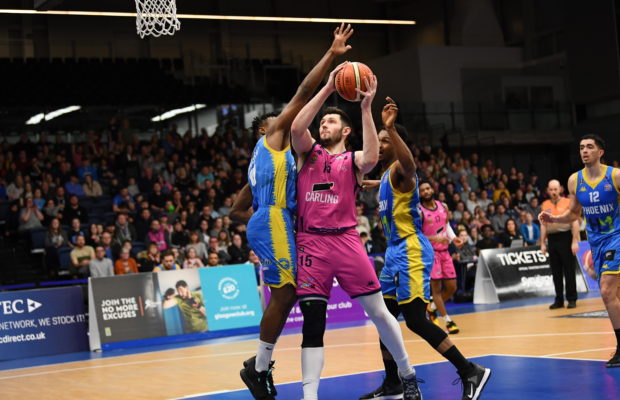 March Madness has taken on a whole new meaning with the global pandemic and there is a sense of inevitability regarding the current season, but the Power Rankings resume nevertheless.

We have a new leader at the top of our rankings – and no, it’s not COVID-19 just yet with the current stance remaining ‘as you were’ for this weekend’s games, despite the majority of leagues around Europe being postponed.

The Rocks now have the upper-hand in the title race after they capitalised on defeats for London and Leicester with a hard-fought overtime triumph against Worcester. Greg Pryor put up 20 points, seven rebounds and eight assists in the 91-86 victory to help his side move into double figures in the win column, and take pole position.

Glasgow are scheduled to make their longest trip of the season as they visit Plymouth on Friday before staying in the South-West to take on Bristol – in what could be a pivotal double-header in the title race – presuming the league continues.

What a difference a week makes. A dominant 34-point win over Leicester put the Lions a step closer to defending their title, but they fell to a six-point defeat on the road against Surrey to drop into second place with their fourth loss of the league campaign.

No Justin Robinson was obviously a big blow for the Lions with Ovie Soko posting 25 points and 12 rebounds in defeat. Six games left with London not due to return to action until April with their next game scheduled against Newcastle to start the final month.

The Wolves are on the rise and almost pulled off an impressive double-winning weekend to become genuine title contenders. As it is, their overtime loss in Glasgow sees them adrift in third place having climbed above Leicester with a convincing road win against Newcastle.

Jordan Williams top scored with 19 points in the 79-95 success as the visitors made a strong start and never looked back, leading by as many as 22 points in the contest. The Wolves are set to face Sheffield on Friday in another important top-five clash as the league standings remain tightly contested.

2020 has been a bit of a roller-coaster for the Riders. Four straight defeats saw them exit two cup competitions as well as fall behind in the title race before going on a six-game streak to get back in the mix. And, now back-to-back defeats have seen them slip to fourth as they were edged out by Bristol on the road last weekend.

Andy Thomson almost sparked a late revival from beyond the arc, though the Riders would fall by four for their fourth league defeat. They have an immediate chance to get back to winning ways when they host the winless Giants on Friday night.

Three wins in a row for Cheshire as they find themselves in joint sixth position alongside Newcastle after beating Manchester 99-88 on Sunday. Jalen Hayes recorded 24 points and 11 rebounds with Parker Jackson-Cartwright continuing his form with 20 points and 13 assists in the win.

Phoenix are two wins ahead of ninth-placed Surrey whilst having a game in hand as they look to avoid a repeat to last season when their post-season fate went right down to the wire. Next up, a trip to Sheffield next Friday in another big encounter between two sides back in form.

The Sharks are beginning to make their move and showing signs of the promise they had during the Cup run back in October/November. Atiba Lyons’ side started the weekend by seeing off Manchester in a 92-80 victory before coming through a defensive battle with Newcastle to prevail 67-66.

Nick Lewis knocked down six triples in a 26-point haul against the Giants, while top scoring again with 12 points alongside Mackey McKnight in a low-scoring encounter. Sheffield are outsiders in the title race, but not to be discounted with a trip to Worcester another big test of where they are at right now.

🏀Fintastic win in the Tank on Sunday!

An important win last weekend for the Flyers as they defeated Leicester in league play for the first time to keep their place amongst the top eight. Lewis Champion came up with some big plays during the fourth quarter as Bristol held off their opponents in a tense finale for their fifth league success.

Despite staying seventh in our rankings, the team are moving in the right direction again after a wobble post-Cup final. With games in hand, they can distance themselves from the battle for the post-season with a home game against the league-leading Rocks a good opportunity to continue their momentum.

No question a tough double-header for the Eagles, but the teams around them all picked up wins as they drop three places heading into the Trophy final. Since mid-February, Newcastle have gone 1-4 in all competitions with the continued injury absence of CJ Gettys causing problems.

The Eagles fell to a 16-point defeat at home to Worcester before an improved display away at Sheffield, though they came up a single-point short in a low-scoring affair. With business as usual (at the time of writing) for the Trophy final, Newcastle will be looking to put their recent form behind them and capture the title for a seventh time.

Surprise. 1) Matthew Bryan-Amaning was back in Scorchers colours following the postponement of the inaugural Basketball Africa League (BAL); 2) The Scorchers ended their losing run by taking down the league leaders with a 101-95 victory over London Lions to revive their push for the playoffs.

Lovell Cook torched his final team down the stretch with eight points in a row to come up clutch and see Surrey home, finishing with 26 points. Creon Raftopoulos’ side are level with the Flyers, albeit having played three more games and they have the week off before a trip to Manchester a week on Sunday.

Well that was fun, wasn't it? Re-live an unforgettable game at SSP! #OneGoal 🔥 pic.twitter.com/5JuxvUrbpZ

The weekend off for the Raiders saw them fall further behind the battle for the top eight as both Bristol and Surrey picked up precious wins. Plymouth are now two wins adrift and are back in action at home to Glasgow on Friday with Paul James’ side one of three teams to beat the Rocks in the league so far as they chase a season double.

(Ctrl C + Ctrl V) Manchester’s wait for a first win continues. The Giants were unable to recover from a costly first half in their 12-point loss in Sheffield before going down by 11 against North-West rivals Cheshire. Ingus Bankevics returned as the leading scorer in both outings with a combined 37 points on the weekend.

The absence of Del’vin Dickerson disrupted their cause and they stay on the road this week as they face Leicester on Friday, looking to pull off an upset. Defeat would see them edge closer to being mathematically out of the race for the playoffs.