GB Under-18s Come up Short in Quest for Semi-Finals - Hoopsfix.com

GB Under-18s Come up Short in Quest for Semi-Finals 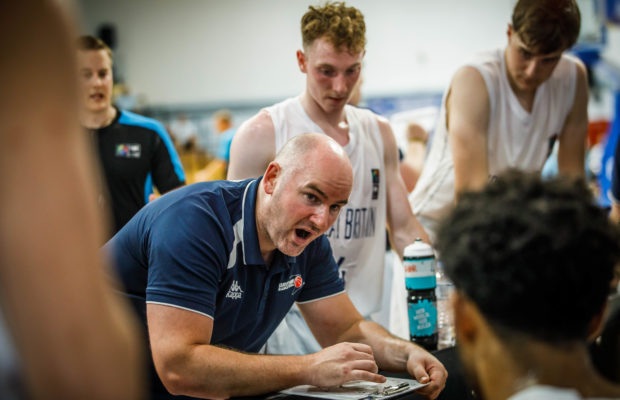 Great Britain Under-18s were beaten 57-71 by Slovenia in their quarter-final at the European Championships, in Volos, on Thursday.

After a slow start, GB took the lead in the third, but saw their final four hopes end as they were unable to follow yesterday’s victory against Montenegro.

Mate Okros top scored once again with a 17-point haul with no other player in double figures for Alan Keane’s side.

Slovenia opened the game up with a 7-2 run and their advantage reached double figures at 16-6 despite both sides struggling to find their rhythm. GB trailed 18-10 after 10 minutes, and although Okros started the second with a triple, they were soon down by 12.

However, GB responded with two 6-0 spells that helped close the gap as they headed into half-time 28-33 behind.

Okros hit back-to-back threes to cap a 10-0 start to the third – the first of which handed GB their first lead of the game. Slovenia gradually restored their advantage with an 15-1 response across a six-minute stretch.

Josh Uduje snapped GB’s lengthy drought without a field goal with a much-needed three before Cam Hildreth’s second-chance effort reduced the deficit to 44-49 with 10 minutes remaining.

Consecutive scores from Tomiwa Sulaiman and Okros kept GB in contention, down six, but a decisive spell followed as Slovenia doubled their advantage to lead 65-53 heading into the closing stages.

There was no way back for GB as they fell to defeat and will now play to finish as high as 5th in the Classification Rounds over the weekend.