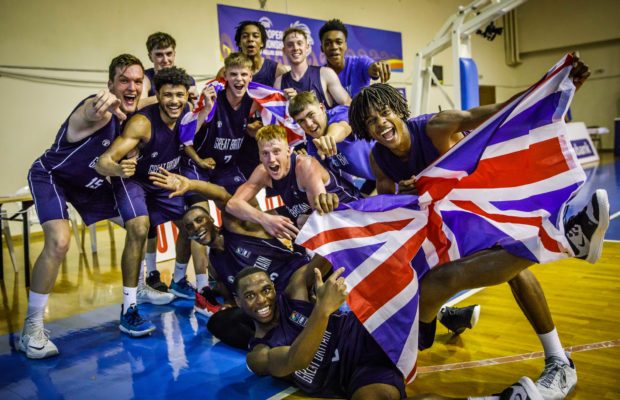 Great Britain Under-18’s produced an impressive display to beat Montenegro 77-62 and advance to the quarter-finals at the European Championships in Volos, on Wednesday evening.

Alan Keane’s side went 1-2 through the group phase, but emulated the feat of GB Under-20s in winning their Round of 16 matchup to retain Division A status for another summer.

GB U18s celebrate as the final buzzer sounds as they are confirmed for a top 8 finish at #FIBAU18Europe and ensure of Division A status next year 🙌🇬🇧🏀 #Hoopsfix pic.twitter.com/z9IhK2wM7R

Mate Okros led the way with 18 points and five assists, while Veron Eze had 13 points and Tosan Evbuomwan also added 13 points along with seven rebounds.

Eze and David Chive hit threes in the early stages before Tomiwa Sulaiman added six points from the bench. Josh Uduje hit a late three to make it 17-11 before Montenegro responded with a tough fadeaway from deep to beat the buzzer.

The Group B winners closed to within a single point at 19-18, but Okros began to take over.

The Drexler commit earned a first call-up to the Senior side last week and having recovered from an injury scare, is growing into the tournament with a tough four-point play immediately backed up by another triple.

Then it was the turn of Eze – put into the starting lineup today – with a long-range two from the corner followed by a contested three to increase the gap evermore. Okros again. Consecutive scores helped GB double up their opponents at 40-20 with the defence having a big say, too, in amongst a pivotal 21-2 spell.

.@Tosan_Evb crushes the putback to give the GB U18s a commanding lead at the half! 🙌🇬🇧🏀 #Hoopsfix #FIBAU18Europe pic.twitter.com/ZPD3s5eL1C

Up 42-24 at the half-time break, GB’s cushion hit 20 points on an Eze three near the start of the third. Each potential fightback was repelled with their opponents only able to get as close to 13 behind with GB taking a commanding 59-41 lead into the final period.

Cam Hildreth fired in a three to start the fourth and GB were rarely troubled as they wrapped up a convincing victory and will face either the Netherlands or Slovenia in tomorrow’s quarter-final.