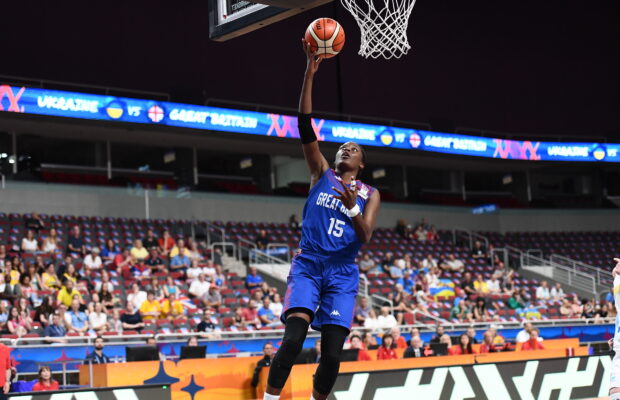 Great Britain’s Senior Women are ensured of a top-two finish in Group A after beating Ukraine 68-54 for their second win at FIBA Women’s EuroBasket 2019, in Riga, on Sunday.

Chema Buceta’s side could still qualify directly for the quarter-finals if Spain lose to Latvia by more than three, but another game on Monday seems likely in the qualification round.

“If Spain lose I will be very happy,” laughed Buceta in the post-game press conference. “I told the Spanish coaches that it would be good for them to have an extra game.

On the victory, he began: “It was a difficult game. We expected them to come back after half-time, but we had the extra effort with better defence and a 24-9 fourth quarter.

“When we play good defence we are very good, when we don’t this is when we get in trouble.”

Temi Fagbenle led the way with a game-high 22 points in the win along with eight rebounds, while Jo Leedham and Karlie Samuleson hit double figures with 10 points apiece.

Sometimes it’s ugly n sometimes u go for triple doubles with TOs 😂 but we got the WIN! And i ain’t worried about Nothing when i got @TemiFagbenle by my side! #BEASTMODE 💪💪💪 team effort tho great job lads way to 🔒 up on defense

Fagbenle opened the scoring with pair of free throws and forced her opposite number, Olha Yatskovets to sit after drawing two fouls in the opening minute. Chantelle Handy fired in back-to-back threes with GB’s outside shooting combined with Fagbenle’s inside scoring helping establish a 19-10 advantage.

Ukraine used an 8-0 response across quarters to cut the gap, but Cheridene Green put a stop to a five-minute scoring drought with a strong post-move and the Tennessee graduate followed with another inside score along with a defensive charge at the other end to make an impact off the bench.

Eilidh Simpson fired in her second triple and the advantage soon jumped into double figures on a corner three from Karlie Samuelson – the fifth of the game for GB, while their opponents were languishing way behind without a make in 18 attempts, incredibly.

An overall 16-4 spell helped put GB in control and they went into the locker rooms in control at 35-24 with Fagbenle up to 12 points along with five boards. However, it was 11 turnovers and Ukraine’s 11 offensive rebounds that stopped the contest already being out of reach.

Leedham’s and-1 made it a 12-point game early in the third before Ukraine finally hit their first 3-pointer and then another as a 13-2 run trimmed the gap to just a single point. Iagupova sat after picking up her fourth foul late in the third, but her side still managed to take their first lead with a score at the buzzer to move 45-44 ahead.

The game was tied at 49-49 until two further scores inside from Fagbenle regained some momentum. Samuelson and Vanderwal connected from downtown to give GB some needed breathing space.

13 unanswered points, in total and that proved pivotal as GB went on to complete their second victory in the competition. The fight remains. And now, just one game from Belgrade, be it tomorrow playing themselves or with a Latvian victory over Spain by 3+ points.