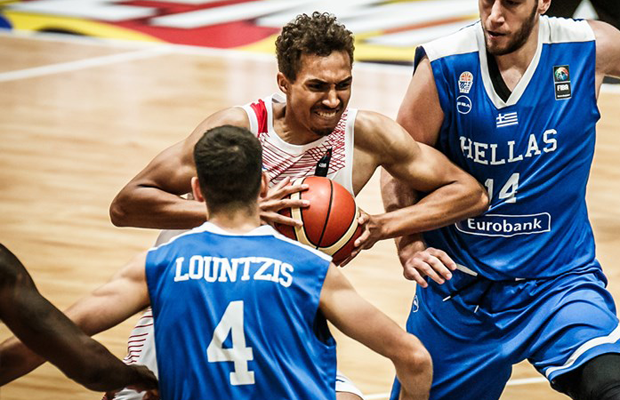 Great Britain Under-20s secured at least one more year in Division A with a 77-64 win over Greece on Thursday afternoon.

It means they are still playing for a highest possible finish of ninth, and can finish no lower than 12th.

“I am exceptionally proud of our group. We showed resilience, toughness and togetherness in a high pressured situation,” Head Coach Marc Steutel commented.

“Everyone within our group has been pulling in the right direction working hard to try and get our best performance at the right time. Whilst the result was fantastic and secures our Division A status, we will review areas of our performance and try to continue to get better in our remaining two games, to finish the highest we possibly can.

“However, for now, I want the players and staff to enjoy the moment and be proud of earning our right to remain in Division A.”

The hoop finally opened from beyond the arc, as GB knocked down 11 three pointers – one off their combined total for the previous four games – on 40% shooting.

With GB having trailed by as many as 15 points in the second quarter, they turned the game around towards the end of the first half, before dominating the the third – punctuated by a three at the buzzer from Carl Wheatle to take control and hold off Greece the rest of the way.

Subbing in with four minutes remaining, Watson-Gayle had 8 of his 14 points down the stretch in the final two minutes, including two crucial lay ups to take the lead back to double digits.

Carl Wheatle once again led GB with 20 points, 10 rebounds and 5 assists, Nelson Boachie-Yiadom added 14 points with 13 rebounds, 3 assists, 2 steals and 2 blocks, whilst Sean Nealon-Lino joined them in double figures with 11.

GB will now have an off-day before returning to action on Saturday, as they await to find out if it will be Ukraine or Iceland.