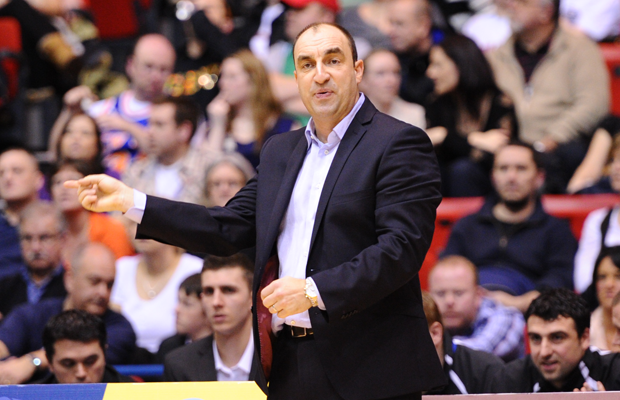 Following on from the confirmation of his appointment as the new Great Britain Senior Men’s Head Coach, Tony Garbelotto sat down with journalists from the Basketball Journalist Association at the Betway British Basketball All-Stars Championship on Sunday at the O2 to answers questions.

What follows is a full transcription of the interview, provided by the BJA, including his thoughts on the new FIBA windows, makeup of the squad, tactical changes he wants to see, the BBL, and developing younger British players and coaches.

What are you thoughts on the GB appointment?

I’m extremely proud of being made the head coach of the national team. It’s something that twenty years ago or so when I started coaching junior basketball in Hackney I could never even have dreamt about. It was trying to be successful, trying to help young players become better players and then getting involved with professional teams.

So very, very proud and this is not so much as a new start for the programme but to continue what I think has been really solid work by coach [Joe] Prunty and his staff and I think it’s a generation that can really be successful so I’m looking forward to starting this World Cup qualification period.

Does the FIBA window possibly heighten the expectations, as some traditional powerhouse nations might not have full strength squads?

I don’t think about the expectations I just think we have an incredible opportunity as a nation. We don’t get many breaks as a basketball playing nation of Great Britain so I think the way they reconstituted this tournament and the whole [World] Cup is really helping us because of course we don’t have any NBA players at this moment unless Joel [Freeland] makes the team and of course Luol [Deng] obviously is there if we would come back for one swansong, we don’t know but it doesn’t effect us.

We don’t have at this precise moment, too many EuroLeague players so again, no problems there so I feel that EuroBasket team that just participated in Istanbul played a great set of games against world powers and I think we got a great opportunity of continuing with that team and doing well, so with the way that it is set up, if I can bring those young players and the senior players together and do things a little differently, I think we can be very successful.

You expecting those players from EuroBasket to participate in World Cup qualifiers?

Pretty much so, yes, I mean from everything I got back, that group is quite tight, they want to do well it’s not something that’s impacting their lives they would be with their professional teams anyway at that time, so it’s almost a break for them and they want to do well so I would hope and my fingers are crossed on this but in November that you will see one of our strongest groups that we can put together with the 12 or 14 players that we select for that camp.

There are definitely benefits for me being back here, I think more from the administration side and the basketball operations side. I think Joe would be honest to say he felt quite detached and was not involved in some of the planning aspects where as I would be I am able and active to be able to get to people like Mark Clark, the Performance Director and board members like Lisa Wainwright.

So I think that’s going to be the biggest area from me being here, personally, but also there isn’t nearly anyone on that team that hasn’t received some sort of coaching from me throughout their careers and so I have a pretty good relationship with them and I hope that I will have the respect and our staff that I will try and put together. Hopefully that will carry through.

How do you feel about the upcoming season with three different coaching roles (Glasgow Rocks, Great Britain and Scotland’s Commonwealth Games team)?

I’m approaching it extremely positively. I’ve always felt that I can do these things independently; the club stuff is actually one of the harder things to do because I really believe there’s been good framework built for GB.

I think I need to tweak a few things from the planning side, from staffing side and more importantly some minor tactical changes as well and I believe that if we have four or five good days preparation, we can hit the ground running against Greece, play really well and then go to Estonia and play well there as well and win. So I’m very confident about that.

For a lot of people, I understand when people say am I taking on too much? If you all know me, you know that I plan meticulously to go about things and I don’t think it will be as big of an obstacle as people think.

Is the ultimate goal to qualify for the FIBA World Cup?

We have short, medium and long-term goals. Short-term is based on winning two games and to have qualification for the next round, which would start September 2018. Our short to medium-term goal is to qualify for that second group.

We are trying to change the way that we approach. Evaluate talent, constant evaluation depth chart for our players, constant tracking of our players both physically and of their basketball performances. Better communication with players, starting to look at younger players and how they can impact the teams and more importantly looking at how players can get back into that group, some of the most talented players where sometimes they have struggled to involve themselves or dismiss themselves out of the group.

Can the BBL be a breeding ground for the best players?

That’s not a good question at this precise second because I walked off that court and look the rules are constituted how they are constituted, I can’t do anything about that, but I know my team is constituted of three import players and everyone else is British, except Boris (Matrakov) who is half-Bulgarian, half-Scottish.

So I am slightly disappointed that some teams have recruited very heavily away from pure British players and we’re not giving younger players the opportunity to breakthrough. But I can only be a voice and can only try to influence owners, GM’s and coaches to go down that road. The younger players have a role in that, and so they have to make a decision if they want to come back.

This league (BBL) is a very competitive league with the way it’s put together now, so I will say that I’m very disappointed that a younger player like Kofi Josephs chooses a lower league abroad and same with Jamell Anderson versus playing in the BBL but we understand why they are trying to make that choice. I hope that the BBL can play a part in the future and I hope that some coaches start giving younger players the chance to play.

Any news on the GB coaching staff?

No, not at the moment, we have a plan in place and that plan there’s a first group of staff and then there’s the ‘what happens if those staff can’t get the time off or are not able to commit’, so what I will say is I’m confident that we will have good staff.

For your vision, will that staff be British-based?

It’s a good question, it’s an obligation for myself to reward the good work that was done by the under age teams and I think there are some really good young coaches who should be put into our pathway and that pathway shouldn’t just be under 16s, 18s and 20s, it should extend to the men’s team.

Somehow we have to try and bridge that gap and being people in even if it’s on a smaller role, they’ve got to be able to take that.

You alluded to tactical changes. Can you elaborate?

I feel there is two areas in basic tactical terms. I feel we should be playing further up the court, defensively. I think that we have some pretty good athletes now that can put good ball pressure and can get out into some passing lanes and we can generate a little more offence from our defence so I’m hoping that we will install that especially if we can get one or two more guards of a higher quality to add to the three high quality guards like Andrew [Lawrence], Teddy [Okereafor] and Luke [Nelson]. I think we can do something there.

I think the glowing area that I took away from EuroBasket preparation campaign is that I think we can run, I really do. I think Gabe [Olaseni] could be the best running four, five in Europe. He’s like a gazelle and if you got him running and running the rim and the ball goes over to him, he’s obviously going to get easier opportunities but he’s going to spread the court for the rest of the players. I just felt that we never pushed the tempo and played a little bit faster.

You’ve got to be smart in Europe and possessions at that level count and I felt we were a bit too safe and conservative. Now we were playing against the best teams in the world and I feel those defences are super high level with huge size that can take away a lot of the good stuff but I still felt we could have been just a little bit faster pace.