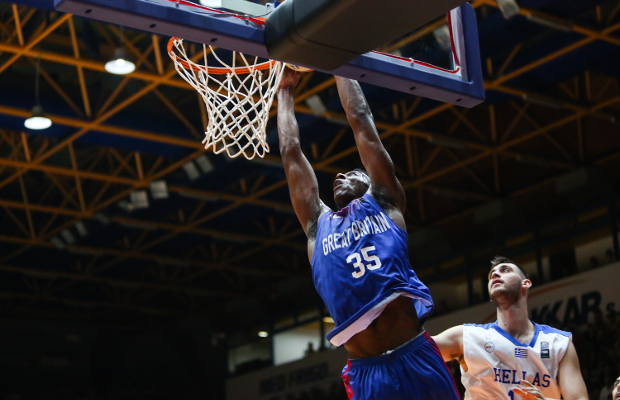 Great Britain’s Senior Men fell to their first loss of the summer after Greece recorded a 92-64 victory in a friendly in Patras.

Joe Prunty’s side impressed in their opener against Ukraine, but came up against much stronger opposition in the shape of Greece – ranked 13th in the world.

The two teams will also meet in London on August 19 for another prep friendly before going head-to-head in the FIBA World Cup qualifiers – with GB’s home game held at Leicester Arena (as announced earlier today).

Gabe Olaseni top scored for the second game running with 13 points, while Dan Clark had 12 points and Kavell Bigby-Williams added 11 points from the bench.

“I like the way we played, I thought we played hard for most of the game,” Head Coach Joe Prunty said.

“I thought there were some stretches where we had lapses on the defensive end with our assignments and on the offensive end with turnovers. In two games, we averaged 17 turnovers which led to a lot of fast breaks and points in the paint. It is important to us that we take care of the ball and give our defence a chance to get stops.

“It was great to get these two games in. It was very competitive and an great opportunity for us but we need to look at this film and see where we can get better and then move on to the game against Israel and make sure that we execute the way we are supposed to on both sides of the ball.”

Clark opened the scoring once again, but Greece set the tone with a 7-0 reply to get up and running. Bigby-Williams made an immediate impact after checking in, scoring six early points before Jules Dang Akodo beat the buzzer with GB trailing 17-27.

Greece began to pull away in the second as their lead soared beyond the 20-point mark, although GB continued to battle and Clark netted his second triple to move to 12 points as GB went into half-time down 34-51.

GB kept fighting and edged the third period 17-15 in a bright 10-minute spell as Prunty continued to look at different options. The hosts turned on the style in the final period as they kept GB to just 13 points in powering to a 28-point victory.

Greece – who were without star forward Giannis Antetokounmpo – had three players in double figures as they made it two wins from two on home soil ahead of their London clash with GB in 11 days time.