GB Under-20s Come Through Thriller to Advance to Semi-Finals - Hoopsfix.com

GB Under-20s Come Through Thriller to Advance to Semi-Finals 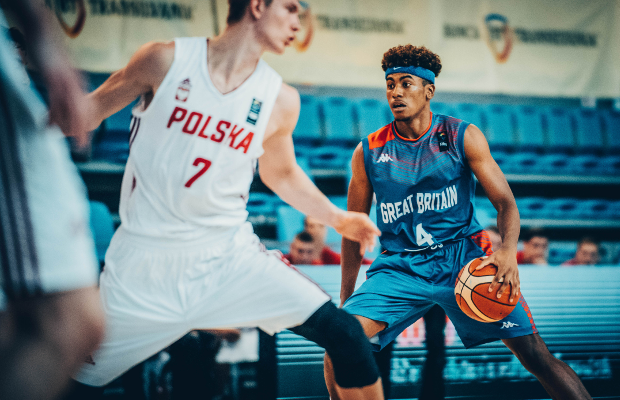 Great Britain Under-20s are now just one win away from promotion back to Division A after seeing off Poland 71-69 in the quarter-finals in Oradea, Romania, on Friday.

Andreas Kapoulas’ side pulled together with a huge fourth quarter and held their nerve through a tense finale as both teams had the chance to snatch late victories.

GB fell at the last eight stage to Croatia last summer and had lost their three previous meetings with Poland including the Division B final in 2013, but produced an impressive display to triumph.

Kyle Carey came up with a number of big plays in the second half and he finished with 13 points alongside RJ Eytle-Rock with Amin Adamu and Andre Arissol adding 12 and 10 points respectively.

That winning feeling for @gbbasketball.. 🙌#FIBAU20Europe Div B semi-finals await!

GB were off to a slow start as they trailed 3-13 after four minutes, but grew into the game and halved the deficit by the end of the first with Arissol having a strong impact on both ends.

A 10-4 run to start the second put GB ahead at 26-25 and they managed to maintain a narrow advantage with Adamu becoming the first player into double figures with the score 38-36 at the break.

A low-scoring third period ensued with GB held to just nine points in the quarter as their opponents moved in front. However, the gap was only four points at 51-47 with 10 minutes to play.

Triples from Carey and Akwasi Yeboah tied the game at 53 before a 10-2 run including eight points from Eytle-Rock made it a 63-55 advantage with five minutes to go.

Arissol hit a three to make it 67-60, but Poland rallied to close within two points at 68-66 with less than 90 seconds left on the clock. Carey recovered from having his 3-point attempt blocked to gather the rebound and lay in, but an and-1 at the other end cut the gap to a single point.

A frantic finish ensued with both teams missing under the basket before Steel grabbed the all-important defensive rebound and went 1-of-2 from the line in the final second.

GB survived the inbounds play and advance to their first semi-final since 2013 where they will face Croatia.

The semi-final will take place tomorrow at 6:45pm UK time.