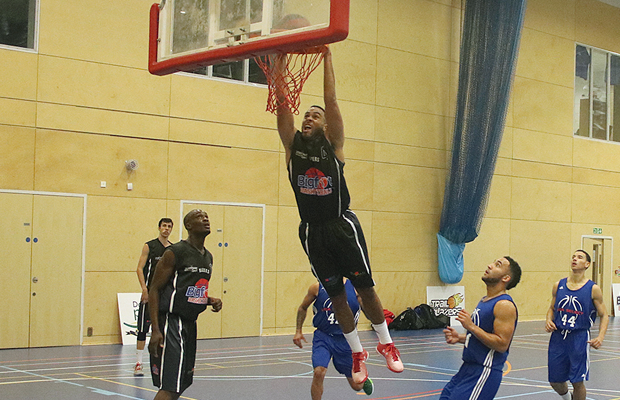 Former England Under-16 and top 1994 born talent Josh Ward-Hibbert is back in Derby to resume a promising basketball career, having stepped away to pursue professional tennis in 2012.

During his tennis career his achievements included setting the 133mph record for the fastest serve at Junior Wimbledon in 2011, being crowned Junior Doubles champion at the Australian Open in 2012 and being ranked 20th best junior in the world, but Ward-Hibbert felt now is the time to return to his first love.

“It was very hard to choose between basketball and tennis,” the 22 year old said of his initial decision to leave the game.

“But I took the choice that I thought was right at the time. It’s been great fun and giving up tennis was a really difficult decision too, but at the same time, you’ve got to remember that I’m not just leaving something I love, I’m also going back to something I love too.

“I’ve had a lot of history with Derby basketball, from when I was about fourteen, right up until I made the switch to tennis, so it feels good to be home. Basketball has always been one of my loves and I’m raring to go now I’m back here with the Trailblazers.”

Ward-Hibbert, who averaged 18.1 points, 6.1 rebounds and 3.6 steals at the 2010 Division B European Championships, says being reunited with Rema Lascelles – who has signed with Derby following graduation from Hawai’i Pacific University – played a huge role in his decision to return.

“One of the biggest factors in my decision was knowing that Rema was coming back after four years at Hawaii Pacific University. I’ve known him for most of my life and we’ve always been great friends. We may have been miles apart for a while, but we’ve kept in touch and knowing he was coming back to play basketball in Derby made it a much easier decision.

“Now I’m back, I’m looking forward to working hard, trying to get my game back to where I want it to be. That will take time, but I’m happy with how it’s going so far. My goal for the season is simply to win every time we step on the court.

“We’ve got a great team with a lot of potential and a lot of talent. I think our strength this season is that we have a lot of players who can do a lot of different things, both individually and within the team. I think other teams will struggle to deal with our athleticism and will find it difficult to stop us as a result,” he said.

Trailblazers Head Coach Matt Shaw says at 6’5”, Ward-Hibbert’s size and athleticism will be a big bonus for his side:

“Josh can flat out play as we saw in our recent friendly games against the USA touring teams. He has great instincts and has a real nose for the game. Having not played for a number of years due to his tennis career it’s going to take a little time for him to get to his peak, which is a pretty scary, because he’s already looking very good.

“Josh brings an intensity and desire to win games that I think can be contagious and I really like that. He’s capable of scoring in a variety of ways but can also do a lot of other things too.

“Like many guys on our roster he’s versatile, at both ends of the floor he can fill a variety of roles, so that’s another big plus. It’s going to be fun working with Josh, he wants to improve and I’m sure he’s going to do over the forthcoming season,” he said.

Derby start their season this Saturday, away to Loughborough Student Riders in the NBL Men’s Trophy (7pm).