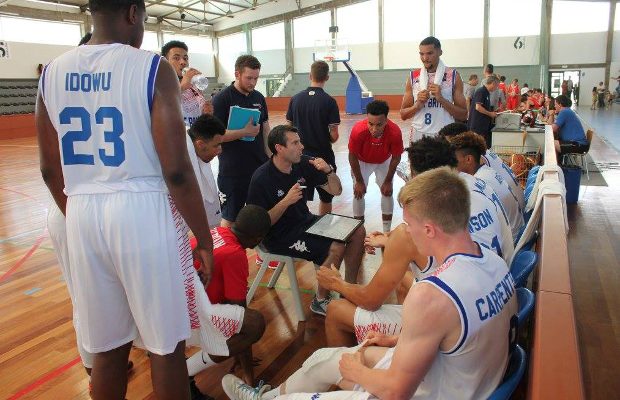 The focus shifts from the process of improvement to points and performance as Great Britain U20 Men prepare to tip-off their FIBA U20 European Championship Division B campaign in Greece on Friday.

Under the leadership of head coach Andreas Kapoulas, GB will aim for an instant return to the top-flight after being one of seven teams moved to Division B as part of a competition re-structure in 2015.

Kapoulas steps up from his role as an assistant in 2014 and 2015 and is joined on the bench by James Vear and Josh Merrington.

The team will be led on court by captain Jules Dang Akodo, who was also part of last year’s squad, but fellow returnee Dwayne Lautier-Ogunleye is forced to miss the competition after suffering a foot injury in Tuesday’s final preparation game.

GB are placed in Group C alongside the hosts and favourites Greece, as well as Netherlands, Kosovo, Republic of Ireland and Albania.

The Under-20s finished their preparation 2-3, picking up wins against Belarus and Portugal, while losing to Portugal in the re-match, Sweden at the buzzer, and a heavily favoured Greece side.

Kapoulas’ side will face each team in their group once, tipping off against Albania at 10:00 BST on Friday, with the top two advancing to the Quarter-Finals and fighting for one of the three promotion spots on offer.

The squad arrived in Greece on Saturday to complete their preparations with games against their hosts and Portugal, and now are ready to battle for promotion.

Kapoulas said, “It has been really good to be in Greece, to get ourselves acclimatised with the surrounding environment and have the opportunity to play Greece, who last year won the U18 European Championship and finished fourth at the U19 World Championship.

“The main emphasis right now is the first game against Albania and making sure we get off to a good start.

“In terms of the overall tournament, we are here to compete. We want to secure one of the top three spots to return to Division A and that is our ultimate goal.

“Preparation has been about the process and getting better every day. Now it’s about performance. Now it’s about everything we have done over the past couple of weeks coming together and performing on the court to the maximum of our ability.”

The GB U20 European Championship Division B roster in full: