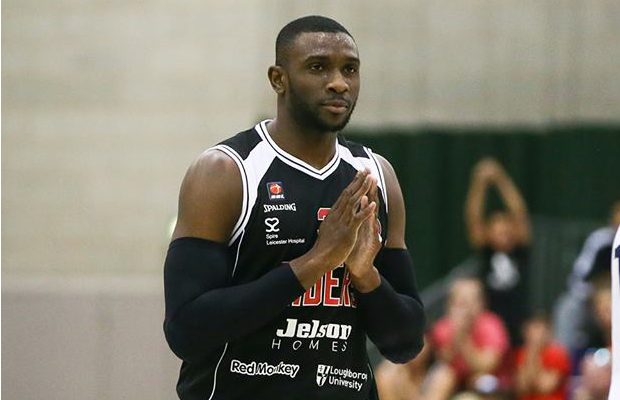 Check out the latest BBL recap as five games took place this week, including the first BBL Cup quarter-final.

Newcastle Eagles survived a huge scare in their BBL Cup quarter-final at home to Glasgow Rocks as they eventually closed out an 83-78 victory. The Rocks looked as though they could avenge last season’s Cup Final defeat, but fell short in the closing stages as the Eagles scored six unanswered points in the final minute. Joe Chapman sealed the win with a pair of free throws as he finished with 23 points and 10 rebounds in the win.

Leicester Riders powered to their sixth win in a row in the league after dismantling Plymouth Raiders with a 73-49 win on the road. Dzaflo Larkai (pictured) had a team-high 16 points on 7-of-8 shooting as the Riders raced into a 46-23 lead by half-time to set the platform for another victory. Josh Wilcher top scored with 17 points for the visitors as they fell to a 0-5 record in the league.

Sheffield Sharks made it two straight league wins on Friday night when they defeated Cheshire Phoenix 97-86 to inflict a fourth straight loss on the visitors. TJ Robinson had another high-efficiency shooting night in a 28-point haul, while Jerrold Brooks and Mike Tuck added 25 and 20 points respectively.

However, Atiba Lyons’ side were unable to extend their winning run to three games on Sunday when they fell to an agonising 87-90 home defeat to Worcester Wolves. Josh Cameron – who was on Memphis Grizzlies’ NBA Summer League roster – netted 20 points including a pivotal five in quick succession late on to cap an impressive debut. Perris Blackwell top scored with 21 points and added 14 rebounds in a 40-minute display with Pavol Losonsky absent.

Manchester Giants had snapped a six-game losing streak on Thursday evening when they came away from a trip to the capital with an 82-90 success over the London Lions. Five players hit double figures, led by Sam Attah’s 17 points. For the Lions, Kai Williams also had 17 as he went a perfect 8-of-8 inside the arc.

The Giants were also due to play Plymouth Raiders on Sunday, but the game was abandoned due to unsafe conditions with the floor deemed too slippery to be played on.