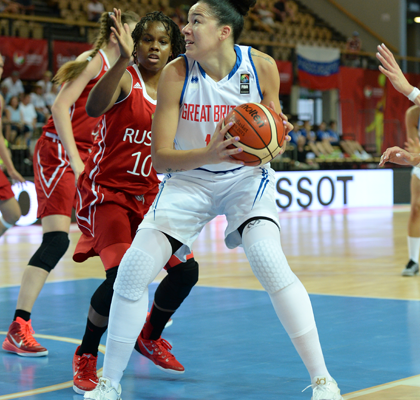 There was a difficult opening night for Great Britain at EuroBasket Women 2015 in Szombathely after they were defeated 71-40 by Group C co-favourites Russia.

GB were unable to match the sheer size and accurate shooting of their opponents on a challenging first outing, with centre Temi Fagbenle taken to hospital with an eye injury.

However, head coach Peter Buckle was remaining upbeat despite the loss.

He said, “They shot the ball very well and made shots under pressure, so credit to them.

“We actually had a lot of good open looks, but we didn’t finish enough of them off.

“It is hard to combat the size of Russia and you really don’t want to lose someone the size of Temi in any game, but especially not against a team who are so big under the basket.

“There were still some real positives in that I thought we got better and we have got some rustiness out of our system.

“Now we have this first game under our belts, we can move on quickly to Latvia and we know they will come out tough after losing in a tight one against Croatia.”

Russia had opened the contest with the first six points, but Great Britain soon got rolling as both Stef Collins and Rachael Vanderwal sunk three-pointers – although it wasn’t a sign of things to come.

Led by EuroLeague Women star Epiphanny Prince, Russia took control and blasted their way into a 25-13 advantage after ten minutes.

Things briefly got worse as Russia extended their lead to 38-15, but GB showed some resolve with a much improved finish to the half as Azania Stewart put in some extra work under the basket.

They scored the last seven points heading into the interval, with young Jay-Ann Harriott-Bravo being thrown into the mix and helping to crank up the defensive intensity.

The impetus wasn’t lost during the break, with Dominique Allen, Vanderwal and Collins all helping GB to continue closing the gap and complete a 13-2 run either side of half-time.

The difference was the defence, which restricted Russia to a solitary basket in an encouraging six minute spell.

Although Russia eventually slipped back into top gear and were able to ease their way to a convincing victory.

Azania Stewart top scored with 10 points and there was a nice cameo from Dominque Allen who pulled down eight rebounds.

“They are a big team and so I just focused on trying to do the best job for the team,” stated Allen afterwards.

“We knew it was going to be difficult as Russia are one of the best teams in the tournament so now we have to react.

“Losing Temi didn’t help, but it’s good to know we can try to bounce straight back tomorrow.”

You can view the full box score statistics here.