Freeland: Skipping EuroBasket Was a Decision I Had to Make - Hoopsfix.com

Support
Home / Brits Abroad / Freeland: Skipping EuroBasket Was a Decision I Had to Make

Freeland: Skipping EuroBasket Was a Decision I Had to Make 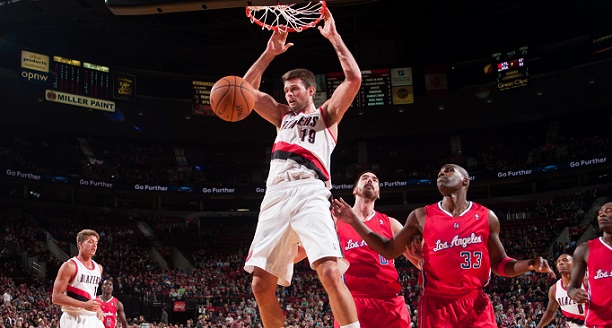 Joel Freeland has no regrets about passing up national team duty with Great Britain this summer to focus on his NBA career, saying it was a decision he had to make to be able to progress.

Freeland, who averaged 2.6 points and 2.3 rebounds in 9.4 minutes during his Rookie year, spoke on his decision at the Portland Trailblazer’s media day last week.

“I felt good about it (the decision to pass up playing for GB), obviously I would’ve loved to have played for my country and represented them in the Eurobasket, but it was a decision that I had to make on a personal level, to focus on my game over here,” he said, whilst talking to Trail Blazers TV.

“Like I said, I didn’t want to go over to Europe and have to play two months of European basketball and then have to come back over here and adjust to the NBA style…again. You know, I just felt like if I went over I might have been taking a few steps back, whereas I could’ve been over here working on my game and taking steps forward.”

Freeland spent the summer between Portland and the Canary Islands working on his game, focusing specifically on the defensive side of his skills.

The 6’10” forward represented Portland in the NBA Summer League in Las Vegas averaging 5 points 5.6 rebounds during five appearances, and added that he could see the work he did in the off-season translating onto the floor.

“During the summer league as well I think defensively I made quite a few steps forward, maybe not so much offensively but I wasn’t really focusing on that as much. The things that are going to get me onto the court is the defensive side of the game, so that’s really been my focal point this summer.”

Freeland added his goal for the season is to make the playoffs and thinks it is well within the realms of possibility thanks to the added firepower and versatility they have off the bench.