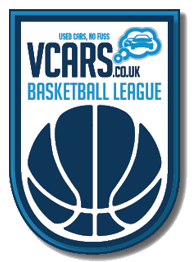 In an announcement last week, EB announced that all seven men’s division and four women’s division will now be known as VCARS.co.uk leagues. To go with the announcement, a new logo to represent that leagues was also revealed (left).

“It speaks volumes that VCARS.co.uk has identified England Basketball and its eleven Senior National (EBL) Basketball Leagues to communicate its brand and company values,” enthused Keith Mair, EB’s CEO. “VCARS.co.uk has made a welcome investment and commitment and we look forward to working with them to build and support the basketball community and in return to help promote the VCARS.co.uk business and brand.”

“Through our sponsorship strategy, VCARS.co.uk is committed to investing in sporting participation and what better organisation than England Basketball?” added VCARS.co.uk Director Robert O’Connor. “England Basketball’s Leagues stretch from Newcastle to Southampton and from Bristol to Canterbury, positively impacting the lives of men and women of all ages, sizes, abilities and ethnicities. We are proud to be part of helping England Basketball thrive.”