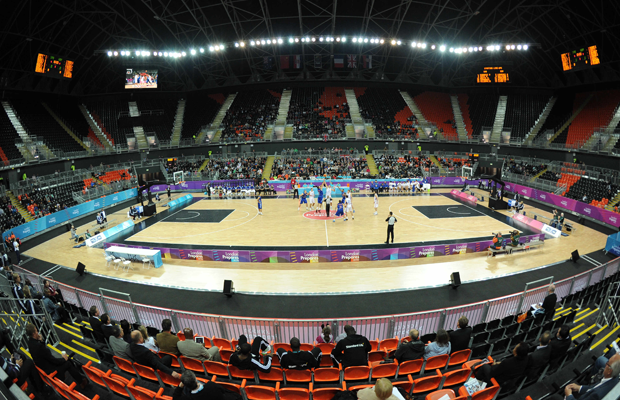 Tony Parker was unstoppable for France as he led them to an 80-58 victory over Great Britain on the first day of the London International Basketball Invitational.

Parker finished with 23 points in three quarters to lead the French side, who looked rattled early before cruising out to a comfortable victory. Joel Freeland led GB with 16 points, Nate Reinking had 11 and Mike Lenzly added 9.

Head coach Chris Finch, felt there were both positive and negatives to take from the game:

“At moments we played well, but at moments we played like a young team trying to find itself which we pretty much are out there. I thought are effort was really good, we just came apart at the wrong time. The key for us is to learn quickly and get ready for tomorrow.”

Dan Clark was pleased with the performance, but recognised there is still room for improvement:

“I thought the first half was a lot better than the second but there’s certainly good things to take from tonight and we’re coming together well. The younger players are learning how to fit in with the team and having Joel back helped as we know how he plays.

“We need to get better, there’s still things to work on but it’s early.”

Tony Parker looked unstoppable for France early on, using his quickness to exploit match-ups, however, hot shooting from Nate Reinking kept GB up as they led 6-5 just under midway through the first period.

It wasn’t long before GB’s young guys saw some action, as Andrew Lawrence and Devon Van Oostrum checked in. They connected immediately as Devon found Lawrence wide open for a baseline three. Tony Parker once again responded, making a lovely dish down low to Noah for the dunk, reducing the deficit to four as GB led 13-9.

A Noah putback off a missed Tony Parker free throw gave France their first lead of the game, 16-15, but Andrew Lawrence made a nice move to the basket down the other end, scoring on a layup to put GB back up 17-16 with two minutes left.

France refused to relent though, piling on the pressure to finish the first quarter up 20-18 behind 10 points from Tony Parker.

Both teams couldn’t buy a basket for the first two minutes of the second period, before Noah drew a foul inside to head to the line. He missed them both, as Freeland hit a tough shot in the lane to tie the game up at 20 with 7 minutes remaining. Both teams continued to struggle, failing to score for a further minute and a half, before Dan Clark hit an elbow jumpshot to regain the lead for GB 22-20 with 5 minutes to play in the half. France couldn’t convert at the other end, as Nate Reinking gave GB a four point cushion with a jumpshot of his own.

Batum responded, going on a 4-0 run of his own to tie the game at 24. France had all the momentum as Batum got a mid-court alley oop and threw it down reverse to electrify the crowd.  The game remained close, before another huge Batum dunk put France up 32-27 with two minutes remaining in the half.

France went into the halftime break with 34-29 lead on GB, as Batum took his tally to 8 points, as GB were led by 9 points from veteran Nate Reinking and 6 from big man Dan Clark.

Freeland started the scoring in the second half as he hit a short jumper off an offensive rebound, but France immediately responded hitting a baseline three. The teams continued to trade baskets,  but France began to pull away, leading 41-33 with seven minutes left in the third. Tony Parker led the third quarter onslaught with 13 points, as France held a 60-48 led on GB heading into the final period.

It looked to be more of the same in the final period as Albicy came out hot, scoring 4 straight points. However, Freeland and Ryan Richards checked in making their presence felt, as the deficit was reduced instantly, with France leading just 64-56 with 6 minutes left to play. France, with Tony Parker watching from the bench, refused to get rattled, going on a run of their own at they took a 72-56 lead with 3 minutes left to play.

Lenzly hit two foul shots as Freeland went to the bench for the rest of the night. Diaw scored on a surprisingly athletic play at the other end before an Andrew Lawrence turnover led to another France score. France cruised the rest of the way for the final result.

Australia 71 – 43 China
Australia were led by 15 points from Peter Crawford, 14 from David Barlow whilst Aj Ogilvy has 11. Damian Martin had 1 point but 7 rebounds and 6 assists. Bo Zhang has 13 points to lead China, with Jianlian Yi adding 7 (check out his fast break dunk here). Full box score can be found here.|

Find a tournament schedule for the whole week here.