I whipped this together for the ‘Back British Basketball‘ campaign I’m currently running and thought it would be worth a feature here. Check out GB’s Top 10 Plays from Eurobasket 2009. No surprise that Pops Mensah-Bonsu fills up half the spots! Check it out and drop a comment below!

10) GB vs Slovakia-Teamwork to Boyd 3
GB produce some really nice ball movement, swinging the ball around to end up in guard Flinder Boyd’s hands who nails the triple.

9) GB vs Serbia-Pops Mensah-Bonsu block
Serbian guard thinks he has a plain route to the basket but Pops swoops in with some great helpside D to swat the shot and CATCH it afterwards. I would have liked to see a little more enthusiasm from the commentators!

8) GB vs Spain-Joel Freeland fast break dunk
If only Pau Gasol had jumped and we would have had a pretty big poster served up. Despite that, Freeland still makes it to number 7 with this nice steal and two handed finish on the fast break.

5) GB vs Serbia-Andrew Sullivan Dunks on Serbia
Throoughout the tournament the broadcast and replay angles kind of sucked; this was shown once again here where we only catch the end of the dunk after they decided to show a replay (replays should only be shown in stoppages!). Replay angles show it clearly for us though; Sullivan takes no mercy as he drives to the rack past 3 Serbians and flushes it home with two hands.

4) GB vs Spain-Nate Reinking And-1
In the midst of Great Britain’s run against Spain, Reinking hits a huge jumper plus the harm. 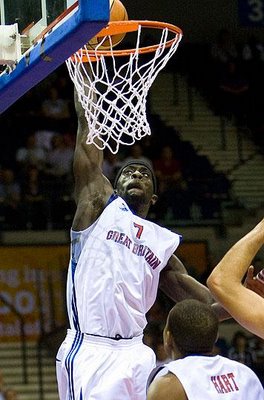 3) GB vs Serbia-Pops Alley Oop
On the fast break, Nate Reinking hits Pops Mensah-Bonsu with the perfect dime for him to catch above the rim and finish with authority.

2) GB vs Serbia-Pops Mensah-Bonsu cram
Off the tough drop step, Pops sends bodies flying as he attacks the rim and attempts to tear it down with this powerful one hander.

1) GB vs Spain-Mike Lenzly 3
Another example of poor broadcast angles, Hart swings the ball around to Mike Lenzly who hits the HUGE three pointer to put GB on top of Spain after being down by as much as 16 early in the game.