GB U20s Edged Out in Semi-Final, Play for 3rd in Promotion Decider - Hoopsfix.com

GB U20s Edged Out in Semi-Final, Play for 3rd in Promotion Decider 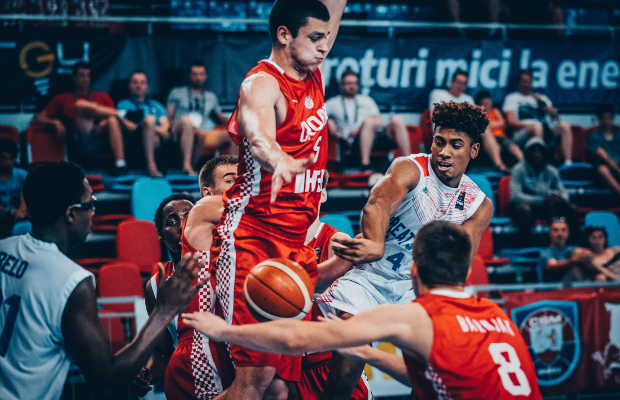 Great Britain Under-20s quest for promotion goes down to the final day of the 2017 European Championships after falling to a 69-79 semi-final defeat against Croatia in Oradea, Romania on Saturday.

Andreas Kapoulas’ side will now face Russia – in a repeat of their earlier tournament meeting – in the 3rd/4th playoff to determine the final promotion spot to Division A.

Croatia made a bright start to lead 9-2 before GB pegged them back to a single point with a 7-0 run. The gap reached six points by the end of the first at 18-12, but Kapoulas’ side began to hit their stride in the second period.

Yeboah set the tone with an early triple as GB would follow up a 0-of-5 3-point shooting effort in the first with 6-of-10 in the second. Eytle-Rock and Wheatle connected from downtown in quick succession to tie the game before Andre Arissol followed suit to put GB ahead for the first time at 26-25.

Arissol netted his second to keep GB ahead shortly after, but a 9-2 close from Croatia gave them a 34-38 half-time advantage.

The hot shooting display from beyond the arc continued when play resumed as Steel fired in another three to spark a 10-3 run to restore the lead. GB led 52-48 through strong finishes from Yeboah and Eytle-Rock, but would face a narrow 55-58 deficit ahead of the fourth.

Croatia opened up a double-digit lead with a 10-2 start to the final period with the lead as large as 17 and there was no way back for GB, despite their efforts eventually reducing the deficit back down to 10.