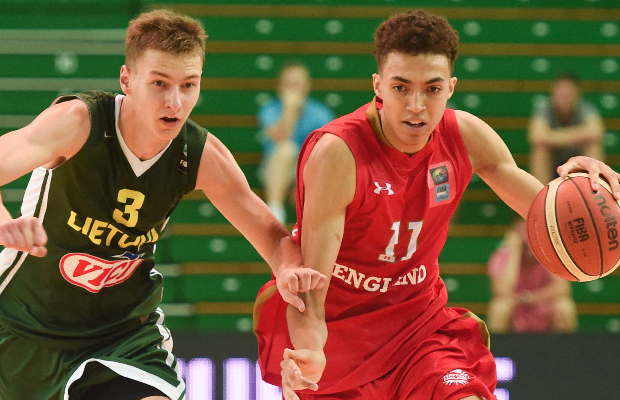 British Basketball has announced the first ever Great Britain Under-18 men’s team for the Division B FIBA European Championship, taking place in Estonia later this month.

Head Coach Alan Keane’s squad head to Hungary on Wednesday for their remaining preparation games, ahead of the official competition beginning in Tallinn on Friday July 28th.

Despite being the first ever GB Under-18 squad, the representatives have ended up all hailing from England, with Nelson Boachie-Yiadom, Micah Savery-Richards, Brian Amabilino-Perez, and Romario Spence remaining as part of the European Championship selection after suiting up for the England Under-18s last summer a year young.

Meanwhile, Hosana Kitenge, Jacob Round and Josh Ogundele make the step up from the England Under-16s last summer, and Kaiyem Cleary and Caleb Fuller make a return to a European Championship squad for the first time since 2015 (with the Under-16s).

It will be European Championship debuts for Kayne Henry-McCalla, Nathan Robinson, and Sesan Russell.

GB’s first opponents will be the Czech Republic, with Group A also including Sweden, Albania, Netherlands and Luxembourg. The top two teams will qualify for the quarter-finals.

Coach Keane commented: “It is always mixed feelings when you finally select the 12 for the Euros.

“On one hand, you are excited for those selected and on the other, disappointed for those awesome guys who are great ambassadors for GB who just came up short of the cut.

“We have now finished training camps and the only thing that stands between us and the championships is a trip to Hungary for two more preparation games. I can’t say enough about the value of these prep games and my only regret over this great campaign is we didn’t get to play four to five more games.

“Hungary will be a good test for us and give us the challenges we need as we hit the home stretch for Estonia where we will open the championships against the Czech Republic.

“Finally, thank you to all the parents, families and coaches throughout the country who support our players daily in the GB journey. Without you this is not possible.”

This is the first year that GB teams will take part in FIBA competitions at Under-16 and Under-18 level, with the programme agreed as part of the process which saw British Basketball affiliated with FIBA as the governing body in the UK.