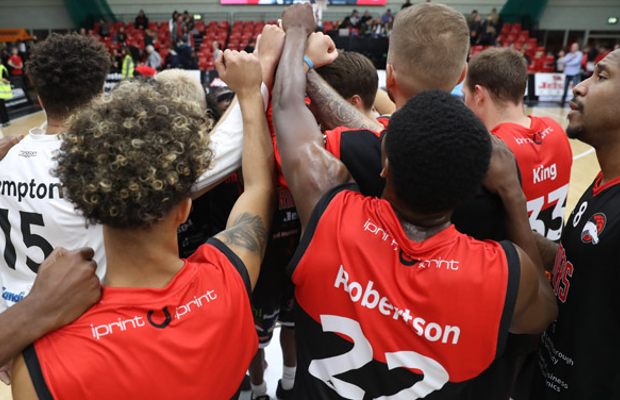 Week Four of the BBL season saw seven of the eight games won by the road team with just two teams left unbeaten..

Here’s a rundown of what happened at the weekend..

14/10 – London Lions maintained their unbeaten start to the season with an impressive 78-88 road win against Newcastle Eagles.

The Lions had not won a league encounter in Newcastle since 2003, but produced a strong finish to come away with victory.

14/10 – Glasgow Rocks started their weekend double-header on the road with an 81-94 victory away at Worcester Wolves.

Sterling Davis’ side produced a dominant second quarter en route to a 13-point win for their second league success in three games.

14/10 – Leicester Riders recorded their fifth straight league victory as they brushed aside Leeds Force in ruthless fashion with a 39-103 success.

The defending champions lost their last league encounter in Leeds, but made no mistake on this occasion with a crushing 64-point victory.

14/10 – Surrey Scorchers ended a run of five straight league defeats as they held off Sheffield Sharks for a 76-81 triumph on the road.

Creon Raftopoulos’ side pulled clear in the middle periods as they improved to 1-5 in the league.

15/10 – Sheffield Sharks then bounced back from Friday’s loss with a narrow 57-59 victory away at Bristol Flyers.

Just 42 combined points were scored in the first half before a close finish ensued with Sharks closing out the win.

15/10 – Glasgow Rocks made it two wins from two on the road this weekend with a 69-84 triumph away at Surrey Scorchers.

Sterling Davis’ side recorded their third league win after a strong second-half performance sealed the victory.

16/10 – Plymouth Raiders picked up their third league win of the season after crushing Manchester Giants 114-63 at home, on Sunday.

It was the club’s largest winning margin in BBL history as they returned to winning ways in emphatic fashion.

16/10 – Leicester Riders held off a spirited challenge from Cheshire Phoenix as they claimed a 90-100 road success to maintain their unbeaten start.

Tyler Bernardini netted eight triples from nine attempts in a 32-point haul to help the Riders go six out of six for the new season.

Keep an eye out for this week’s Top 10 coming soon!