Duco van Oostrum: It's All Over - Hoopsfix.com

Duco van Oostrum: It’s All Over

The final game for Great Britain of a very long tournament was against pre-tournament favourite Poland. It’s been long tournament. Great Britain lost and finished sixth, equalling their best ever finish in Austria in 2010, with a team that featured, among others, Ovie Soko, Andrew Lawrence, Will Neighbour, Myles Hesson, Will Hall, big brother Nigel van Oostrum, and Jamell Anderson.

Great Britain also had the honour of having a member in the all star tournament five, Devon, voted best point guard of the tournament. Devon finished the tournament first in assists (6.4), in fouls drawn (over 9 per game), fourth in scoring, 19.6 (behind Ali who finished 3rd, with 19.7).

These are fantastic achievements for GB U20s; everyone is disappointed to have narrowly missed out on promotion, but the current results do hold up very nicely. I will write a reflection on the tournament experience once I’m back home in Sheffield again, but for now this game.

In the first half, Great Britain held their own well, very well even. Poland went up 12-4 and GB struggled with only points from Ali, but tried to work its defensive intensity. Jesse hit a great three at the end of the quarter, which finished 23-14 Poland. Devon, Grant, and Ali got going in the second quarter, closing to 34-30, but then the Poles hit back to take a 10-point lead at the half.

What came next is difficult to write and fathom. The lead steadily increased to 20 but the manner in which was worrying. I honestly feel—and this is why it’s a blog, not ‘objective journalism’ so this is the subjectivity of a parent and please see that as context of this—that what in reality was a 15-point game difference between Great Britain and Poland became a 30-point one.

And here I’ve censored myself and erased what I wrote. Maybe later.

Luckily, there was plenty to cheer about for the players and as GB crowd, we hope they can reflect on their successes in future. They beat eventual winners Croatia in a true shock, and had Devon and Ali up in the statistical echelons of the tournament. 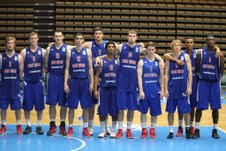 Again, they equalled GB U20s best ever result and a significant number of the players are also eligible for next year. There was also plenty of support from them from the team and from GB management—director Roger Moreland was there the last couple of day to support the GB U20s, missing out of the Golf Open because of it (well, is Golf a sport, really, anyway?).

They were so close to qualifying and that will haunt everyone for a while. I’ll try to write a bit about that in the reflection piece.

Everyone’s now getting ready for departure back to their homes, and maybe ready for holidays, after a long and grinding tournament. Hope all those who know the players give them a heartfelt welcome and expression of gratitude to service to national team basketball.