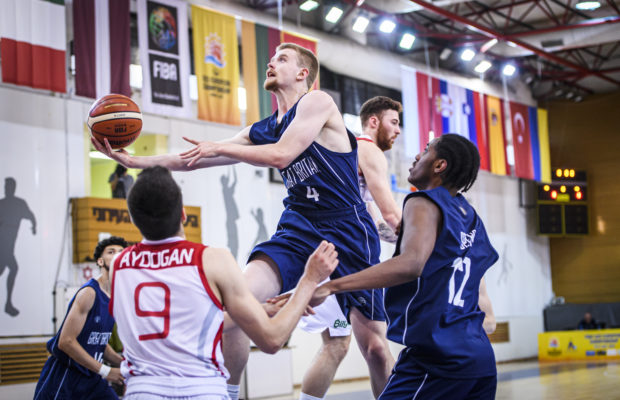 Great Britain Under-20s will play for 7th place on the final day of the European Championships in Tel-Aviv after falling to a 104-87 defeat against Turkey, on Saturday afternoon.

Karl Brown’s side were competing in the 5-8 Classification Round after Thursday’s last eight loss to Germany, but fell to their second loss to Turkey.

Jacob Round fired in a 30-point haul including 8 of 11 shooting from 3-point range, while Kayne Henry had 23 points and Niall Harris added 10 points, five rebounds and four assists.

A 7-0 run put GB ahead in the early stages with Round firing in four triples from five attempts in the opening period to help his side into a 26-20 advantage.

The Spanish-based guard hit another early in the second and moved to 20 points by the half with GB still ahead at 37-36 with 4:13 left in the half. However, Turkey enjoyed a quick-fire 12-0 burst as part of a 36-point second quarter blitz to lead 56-46 at the break – shooting 64% from the field.

The offensive onslaught continued when play resumed with Turkey’s lead hitting 20 points. Round scored the next five for GB including a seventh triple, but they would trail 81-60 ahead of the final 10 minutes.

GB had been as many as 24 points behind before putting together a strong finish to take the fourth quarter and finish on a high ahead of their final game on Sunday with Round making it to 30 points.