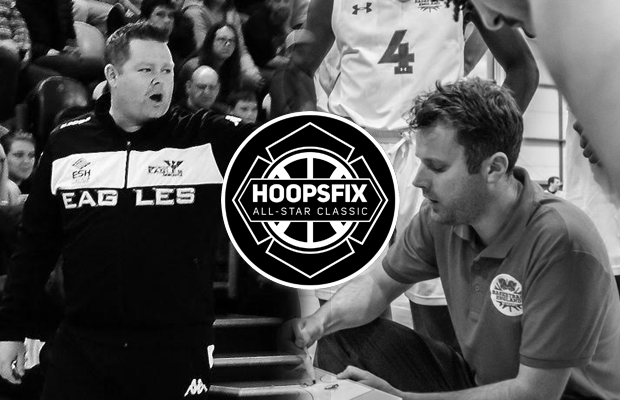 Current England Under-17 Head Coach, Guy Coles, and England/Great Britain Under-18 Assistant Coach Ian Macleod will face off as Head Coaches in the Underclassmen game at the Hoopsfix All-Star Classic on Saturday June 2nd in Brixton.

It will put a wealth of international experience at the helm of each team, with both coaches having been a part of a promotion-winning squad at their respective Division B European Championships.

Coles, who heads up SGS College’s EABL side won a Bronze medal with England at the Division B Under-16 European Championships as an assistant in 2014, will take the reigns of Team White.

“The Hoopsfix All-Star Classic is a great standalone event in the British Basketball calendar,” Coles said. “I’m honoured to be a part of it and eager to see the best talent from various programmes go against each other.

Macleod, who is Head Coach of ABL side Gateshead College – where they finished runners up in 2017 – and assists with Newcastle Eagles’ BBL side, won a Silver medal at the 2017 Division B European Championships with the Great Britain Under-18s, and will coach Team Black.

“It’s a pleasure to be part of this amazing event, and to help showcase some of the incredible potential we have in the UK,” Macleod said.

“The exposure the players receive is what makes the event unique, and I look forward to contributing to it. “

General sale tickets officially sold out on Saturday, but a limited number of previously sponsor allocated tickets have been released – make sure you don’t miss out by buying yours now – click here!