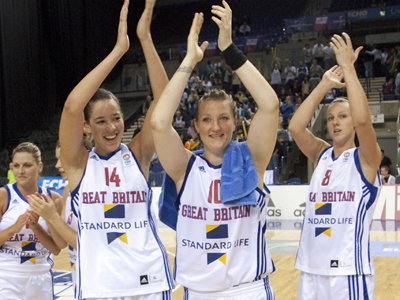 The GB Women will be playing at Eurobasket 2011!

The Great Britain Women’s team secured top spot in their group last night with a 77-59 win against Germany, securing their qualification into Eurobasket (2011) for the first time ever.

In a busy Echo Arena, the Great Britain women’s team started the game well. By going inside early, GB got good production from forwards Julie Page, Azania Steward and Kim Butler. All three were able to pick up offensive rebounds and convert easy shots. The first quarter finished 20-11, with Page dropping 10 points.

Natalie Stafford opened the quarter with a massive running three pointer, then Jo Leedham converted a three-point play to extend GB’s lead to 15.

Coach Tom Maher’s side picked up the intensity on the defensive boards, limiting Germany’s second chance points, however, defensive lapses led to a number of easy baskets for German side. The lead, however, continued to increase behind the play of Great Britain’s bigs. Jo Leedham capped a good second half with five straight points, showing she can’t be stopped offensively and pushing the score to 47-24.

Germany made a 8-0 run in the third quarter thanks to the continue rebounding presence of Linda Fröhlich and scoring of Roli-Ann Nikagbatse, but still GB maintained their composure and kept the lead above ten. The fourth quarter saw much the same for Team GB, including the continued dominance of Leedham and Page as well as better shooting as a team. A period of tough no calls from the referees led to Germany cutting into the home side’s lead but GB always looked in control of the game, finishing the win, 77-59.

Coach Maher was delighted with the win,

“We ran over Germany tonight, and Julie gave us a great start with her rebounding. It’s a matter of being there all of the time and competing all the time – it was a magnificent effort”

Coach Maher and his team will now head out to Dnipropetrovsk to face the Ukraine in their final group game on Sunday evening before the celebrations begin!